Plot:
The Dark Star is a scout ship, sent out with its remaining crew of four – Doolittle (Brian Narelle),  Pinback (Dan O’Bannon), Boiler (Cal Kuniholm), and Talby (Dre Pahich) – to ready the universe for human colonization. That is achieved by blowing up unstable planets that could get in the way, something that they’ve been doing for 20 years now. But time hasn’t been kind neither to them, nor their sanity nor their equipment, and so things are really starting to go to shit.

Dark Star was fantastically absurd. It’s a wonderfully strange and absolutely funny film – and the only one of the Carpenter movies I saw that gives In the Mouth of Madness serious competition for the position of my personal favorite. I loved it.

END_OF_DOCUMENT_TOKEN_TO_BE_REPLACED

Plot:
Douglas Quail (Arnold Schwarzenegger) would be happily married to Lori (Sharon Stone), if it wasn’t for a recurring dream where he’s on Mars with a mysterious woman. He decides to confront this dream by going to Rekall Inc., a company that provides real-seeming memories of vacations in the most exotic places – like Mars. But the Rekall treatment triggers actual memories and suddenly Doug finds himself in the middle of the revolution on Mars as a spy.

I had completely forgotten how absolutely campy and gory this movie is. That completely makes up for the rather lackluster performances. It’s amazingly fun to watch. Plus, they actually improved the original story. 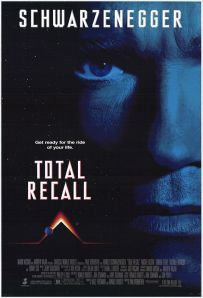 END_OF_DOCUMENT_TOKEN_TO_BE_REPLACED

Alien
Director: Ridley Scott
Writer: Dan O’Bannon
Cast: Sigourney Weaver, Tom Skerritt, Veronica Cartwright, Harry Dean Stanton, John Hurt, Ian Holm, Yaphet Kotto
[I am sure that I already saw this film, probably about 10, 15 years ago or so, but I really couldn’t remember a damn thing about it, so I’m not labeling this as a re-watch.]

Plot:
The crew of the Nostromo – a commercial mining ship – are woken from hypersleep in the middle of their journey after the ship received a distress call from a planet they were passing. They land to investigate. While Captain Dallas (Tom Skerritt), Lambert (Veronica Cartwright) and Kane (John Hurt) head out on the surface, Ripley (Sigourney Weaver) discovers that the distress call was actually a warning. But by then Kane already stumbled on a nest of alien eggs…