Plot:
Douglas Quail (Arnold Schwarzenegger) would be happily married to Lori (Sharon Stone), if it wasn’t for a recurring dream where he’s on Mars with a mysterious woman. He decides to confront this dream by going to Rekall Inc., a company that provides real-seeming memories of vacations in the most exotic places – like Mars. But the Rekall treatment triggers actual memories and suddenly Doug finds himself in the middle of the revolution on Mars as a spy.

I had completely forgotten how absolutely campy and gory this movie is. That completely makes up for the rather lackluster performances. It’s amazingly fun to watch. Plus, they actually improved the original story.

There is actually not much left of Dick’s story in this film, which is actually one of the movie’s strengths. Not that I didn’t laugh at the original ending of the short story, for example, but I don’t think it would have translated well on screen. And I actually enjoyed the switching around of Douglas’ identities in this film. Plus, the plotting, while not without instances of stupidity, is a lot less silly than the original story.

And I just have to give huge props to the movie on how it treats its women. The story treats Kirsten/Lori very well, and apart from the receptionist, there are no other women to be found. In the movie, both Lori and Melina kick some serious ass (though there are limits: they introduce Michael Ironside’s Richter seemingly for no other reason than Lori not doing all the fighting; and in the end  where Melina basically throws herself after Doug it’s like she thinks her life without him would be worthless, which made me headdesk a bit).

But the best thing about the film are the special effects. Special effects look outdated pretty quickly, and watching it now there certainly is a certain quaint retro-futuristic vibe to the movie, but the puppet work and make-up are fucking amazing.

The pacing is good and the film just pulls you along. The only thing where it really fails – apart from the wooden acting – is the political dimension. It tries so hard to have a message, but it’s probably best just to shrug that off as naive. 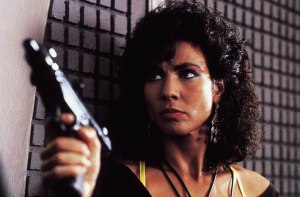 Summarising: If you don’t take the film too seriously, it can be enjoyed whole-heartedly.