Plot:
Elisa (Sally Hawkins) works as a cleaning lady in a big research facility. That facility has recently become the home, or rather prison, of a mysterious sea creature (Doug Jones) that the scientists want to study and exploit. Elisa discovers the creature by chance, but she quickly becomes friends with him, teaching him sign language. But the facility, and above all Colonel Strickland (Michael Shannon) have plans for the creature – and they are not necessarily humane.

I liked The Shape of Water in many things, but I found its treatment of disability absolutely problematic – and that soured things considerably for me. I still ended up finding it mostly sweet, but it should have been better about that.

END_OF_DOCUMENT_TOKEN_TO_BE_REPLACED

Plot:
Edith Cushing (Mia Wasikowska) dreams of publishing a book but until that happens, she’s quite happy at home with her father Carter (Jim Beaver). But then Thomas Sharpe (Tom Hiddleston) and his sister Lucille (Jessica Chastain) come from England to her father with a business proposal and Edith finds herself falling for Thomas. Her father makes inquiries about the Sharpes and is not convinced that Thomas would be a suitable match. But then Carter dies surprisingly and Edith follows the Sharpes to England. But there are ghosts that follow all of them. Literally.

Crimson Peak is the quintessential gothic horror story. It is so much the distillation fo the genre that nothing in it will surprise you, but if you like the genre, you’ll love the beautiful love letter to it that del Toro has crafted with this film.

END_OF_DOCUMENT_TOKEN_TO_BE_REPLACED

Plot:
Reed (Ioan Gruffud) and Sue (Jessica Alba) are about to get married. But being a superhero couple makes having an undisturbed wedding rather difficult, especially since a series of global disturbances just caught Reed’s attention. But when a mysterious silver surfer crashes their wedding and causes a lot of destruction in New York, they realize that the disturbances are not actually limited to Earth itself.

I was talking with Arysuh about never having seen this film or the one before and that culminated in me watching and livetweeting both films while drinking vodka. You can read the entire thing after the jump, in lieu of a proper review. For a short summary know this: 4: Rise of the Silver Surfer is abysmal. Not even alcohol makes it funny and I was cringing throughout most of the film. It’s sexist and boring. If you value your sanity, stay away.

END_OF_DOCUMENT_TOKEN_TO_BE_REPLACED

Plot:
Jamie (Rachel Nichols) wakes up in a cell connected to a series of tunnels. She doesn’t know why she’s there or how she got there but she finds herself pitted against Sabrina (Zoe Bell) in a fight for life or death. And they are not the only women in there who apparently provide some form of entertainment for somebody.

Raze does not exactly have a new concept but it works, mostly due to the amazing cast of kick-ass women. 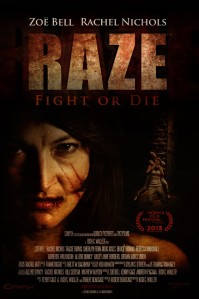