Plot:
Jamie (Rachel Nichols) wakes up in a cell connected to a series of tunnels. She doesn’t know why she’s there or how she got there but she finds herself pitted against Sabrina (Zoe Bell) in a fight for life or death. And they are not the only women in there who apparently provide some form of entertainment for somebody.

Raze does not exactly have a new concept but it works, mostly due to the amazing cast of kick-ass women.

There are a few things that Raze gets absolutely right: For one, it takes a usually utterly male setup and fills it to the brim with competent, aggressive and above all human women who are as diverse as their backgrounds. And that happens rarely enough that it makes me applaud them for it right from the start. Two, it has an amazing cast to play those women – though there may not be many Oscar contenders among them, they were above and beyond what you usually get in these kinds of film and all of them were fantastic fighters.

Three, it doesn’t sexualize them at all. It’s their fighting that is supposed to bring the entertainment, not their boobs or the fact that they are women. Four, they get to have their emotions as well. And five, it can all be nicely interpreted as a rather crude patriarchy-metaphor.

But the movie isn’t perfect. The fights, even though their emotional content is different every time, get rather repetitive and would have benefitted from more varied choreographies. Everything is pretty predictable – from the winners of each fight, to the kind of insane people who would do this to who is involved. And it generally could have done with a bit more freshness.

Still. It was extremely entertaining and who wouldn’t want to spend 90 minutes watching Zoe Bell, kicking ass or not? 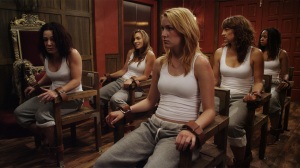