Plot:
Ray (Vin Diesel) is a soldier. Returning home from yet another dangerous mission, he is happy to relax with his wife Gina (Talulah Riley). Until they are both kidnapped by Axe (Toby Kebbell) – and killed. But Ray rises from the dead with the help of Dr. Harting (Guy Pearce) and his nanotechnology that gives him superhuman powers. Ray uses those powers to hunt down Axe and avenge his wife’s death. But he soon discovers that things aren’t quite as they seem.

Bloodshot is not a great film, but it is entertaining and could have been actually pretty good if it hadn’t been abandoned entirely by its own soundtrack.

END_OF_DOCUMENT_TOKEN_TO_BE_REPLACED

Plot:
Baby (Ansel Elgort) loves music (that drowns out his tinnitus) and driving, at which he’s also very good. A fact that Doc (Kevin Spacey) is using to his own advantage: he coerced Baby to drive during the robberies he meticulously plans. But Baby will soon have worked off his debts with Doc and is looking forward to a free life then, maybe with Debora (Lily James). But Doc isn’t willing to give Baby up all that easily.

Baby Driver wasn’t bad, but I expected it to be more than just nice. It’s well-made but there are quite a few things that didn’t work for me. I can’t help but feeling disappointed about it. 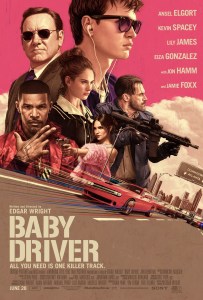