Plot:
Laurel, Illinois, is in the middle of nowhere and nothing much happens there. But with Christmas and a snowstorm both approaching, people come together that may not have otherwise. There’s young singer Stuart (Shameik Moore) who follows Julie (Isabela Merced) off a train when it gets stuck in the snow, so she can show him the sights of Laurel – or rather the sight: The Waffle House. Dorrie (Liv Hewson) works at the Waffle House together with Keon (Jacob Batalon), but she’s mostly busy with trying to help her best friend Addie (Odeya Rush) who has trouble with her boyfriend, and figuring out why Kerry (Anna Akana), whom she had an amazing connection with at a party, is showing her the cold shoulder now. Keon meanwhile wants to pull off the party of the century, but all his plans fall flat, so he ropes in Tobin (Mitchell Hope) to help. Tobin is preoccupied, though, because he wants to tell his best friend Duke (Kiernan Shipka) that he really likes her – which is not that easy.

Let It Snow was the kick-off film for my sappy Christmas movie binge that had me firmly in its grasp this holiday season, and it really was a nice start. A talented young cast, Joan Cusack and everything ending well is a good mix that gave me exactly what I was looking for.

END_OF_DOCUMENT_TOKEN_TO_BE_REPLACED 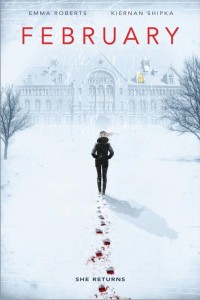 END_OF_DOCUMENT_TOKEN_TO_BE_REPLACED

Plot:
Cathy (Kiernan Shipka) leads a happy, sheltered life with her parents and siblings. But when her father suddenly dies, her mother Corrine (Heather Graham) doesn’t know what else to do – so she returns to her parents, despite the falling out she had with them. But once they’re there, it becomes clear that Cathy’s grandmother (Ellen Burstyn) doesn’t want the children there. Instead of a warm welcome and a safe haven, Cathy, her older brother Christopher (Mason Dye) and their two younger, still incomprehending siblings get locked into the attic for an indeterminate amount of time, with only occasional visits by their cruel, religious grandmother and their flighty mother.

I am not entirely sure why I started watching this film or why I finished it. The entire set-up is so convoluted, the acting is so very mediocre (apart from Ellen Burstyn and Heather Graham) and then the incest… but it does go by rather quickly and I watched it with a kind of horrified fascination. 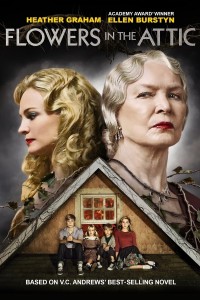