So far, Emma Roberts hasn’t exactly made me gasp with her acting. But in February she wasn’t bad at all, though she admittedly paled next to Kiernan Shipka who managed to steal the film away. Part of that is certainly due to her ethereal face with those huge eyes that seem almost unreal, but a good face alone doesn’t make a good show and Shipka certainly knows how to deliver in the acting department as well.

Storywise some things were very obvious [SPOILER] like that Joan was an older Kat [/SPOILER] while I was quite taken with the central idea regarding the possession in this film that I hadn’t seen done that way before: [SPOILER] that Kat appreciated being possessed because it meant having company and that she tried so very hard to be possessed once more because she was so incredibly lonely. [/SPOILER] It was an interesting, heartbreaking idea which is why it was so disappointing that it was a final twist that wasn’t actually explored in the film. 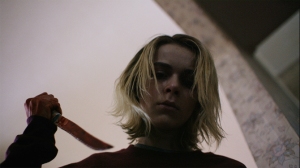 The film builds slowly and in the beginning that didn’t bother me at all. But when it never actually picked up its pace, it started to lose its momentum and I started to become impatient for things to happen. Particularly because I had guessed the first twist and wanted to story to reveal it, so that we could cover new ground.

But it didn’t happen and so my interest in and satisfaction with the movie started to fade. In the end I just wasn’t particularly excited about it. For the film of a first time director it shows a lot of promise though, so let’s see what Perkins comes up with next. 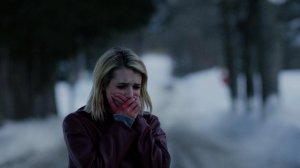