Plot:
Will (Diego Boneta), Christy (Jocelin Donahue), Michelle (Maiara Walsh) and Antonio (Andrés Velencoso) have arrived a day early at the location where they’ll be working as counsellors for a summer camp for the next few weeks. They are supposed to spend the day preparing for the kids’ arrival and to get to know each other. But their plans have to change when the animals around them start to turn into raging zombie-like monsters. At least at first it’s only the animals.

Summer Camp was rather entertaining for about half an hour. Then it started to become extremely repetitive and with that repetition boring. Plus, the characters remained flat and there were some serious logic errors, leaving more frustrated than anything else.

The film starts off strong. I especially liked the opening sequence that manages to build quite a lot of tension simply by playing with our expectations – despite nothing actually happening. It’s also pretty much the only time, the film invests a little energy to set up and work on its characters. Unfortunately, it wasn’t enough character work and so all four of them remain flat, one-note characters.

Since the movie, once the central – and admittedly interesting – idea [SPOILER] (that the rage virus only lasts for a little while before everybody returns to normal) [/SPOILER] is established, starts to repeat itself, that flat characterization is particularly grating. Instead of using the repetition like a spiral to bring us deeper and deeper into the situation and the characters, it remains a circle, taking us around and around without ever achieving more depth. 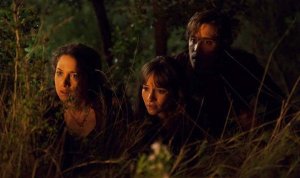 Yet somehow they still manage to include plot holes in that circle. Worst (though not the only) offender is the final scene, where the rather simple solution to their problem – and a solution that they had executed not 15 film minutes earlier – suddenly isn’t even an option anymore. Nobody knows why.

That final scene was also the final nail in the coffin of my enjoyment of the film. I really didn’t care much for it by the end, despite the strength it showed in the beginning.

Summarizing: Can be skipped.