ABCs of Death 2
“Sequel” to: The ABCs of Death
Part of: /slash Filmfestival
[Reviews by cornholio and Maynard Morrissey.]

Plot:
Like the first film, ABCs of Death 2 is an episode movie in which 26 directors each got a letter in the alphabet to which they chose a word from which they built their story/short film. The letter M was given to an unknown director through a contest.

Of course there are segments that I liked better than others and some I didn’t like at all, but altogether, I liked ABCs of Death 2 better than The ABCs of Death. Julien Maury – who was a guest at this year’s /slash – told us beforehand that one of the rules they got for their segment was that they shouldn’t use too much toilet humor. Apparently all the directors got that memo and it really does help. Watching 26 short films in a row is certainly exhausting, but since the last few segments are particularly strong, you don’t feel it as much. I really enjoyed myself.

As a warm-up we got to see the M-finalist Le Meat by Austrian Wolfgang Matzl (who also did the fantastic credits animation for the feature) which was really cool, funny and weird. A great way to get started!

[After the jump, I’ll talk briefly about all the segments separately. That includes listing the directors, writers (as far as I could find out who wrote what) and the names of each segment. Since it was fun to guess the titles while watching the film, you might not want to read on if you haven’t seen it yet.] 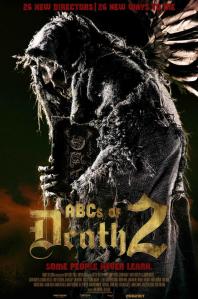 END_OF_DOCUMENT_TOKEN_TO_BE_REPLACED

Plot:
Lukas (Marius Jampolskis) is part of a neurological research team. Their project consists of trying to connect the mind of a comatose patient with Lukas’ by connecting their brains. Already by their second try, Lukas finds himself directly interacting with the other consciousness – a young woman named Aurora (Jurga Jutaite). But not only that, he is incredibly drawn to her and they immediately start an affair. But Lukas doesn’t want to share that progress with his research group or his girlfriend Lina (Martina Jablonskyte).

Once more I relied completely on the /slash’s taste and didn’t inform myself at all before I went into the film. And what I got was a breathtakingly beautiful with a dreamlike quality and an interesting story. It might have been a little predictable, but I didn’t mind that at all. I wish all movies I never heard about before but end up seeing by some coincidence were this wonderful.