Plot:
Harley Quinn (Margot Robbie) was just broken up with and she’s not dealing all too well with the Joker’s rejection. As she parties her way through the heartache, she keeps the break-up under wraps, at least for a while. When she finally is able to admit to the break-up herself, she decides that a public statement is in order. What she didn’t consider, though, is that it would mean that half of Gotham city believes her to be an easy target now. Very quickly, Harley finds herself in the crosshairs of pretty much everybody, above all Roman Sionis (Ewan McGregor). To save her own skin, Harley gets involved with the search for a diamond for Sionis and things get even more complicated from there.

Birds of Prey: And the Fantabulous Emancipation of One Harley Quinn is an absolutely fantastic film. It’s funny, has great characters, awesome action and looks gorgeous. It immediately became one of my favorite superhero movies.

END_OF_DOCUMENT_TOKEN_TO_BE_REPLACED

Plot:
Hank (Paul Dano) is stranded on a deserted island. His only company is Manny (Daniel Radcliffe). It’s just that Manny is actually dead. But he is still able to speak and his body has some absolutely perfect properties for Hank’s escape. So the two of them make their way back home. And the longer they travel together, the more they discover about each other.

It’s hard to put into words how strange Swiss Army Man actually is and how much that strangeness benefits it without it being a gimmick. Much too often, the strangeness of a film feels like posturing, here it is an absolutely central part of the film’s heart and soul – and it’s got a lot of those, transforming Swiss Army Man into a magical experience that is bound to make you emotional.

END_OF_DOCUMENT_TOKEN_TO_BE_REPLACED 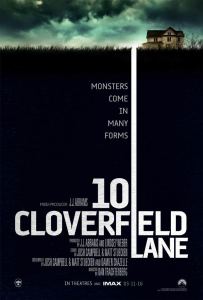 END_OF_DOCUMENT_TOKEN_TO_BE_REPLACED

Plot:
John McClane (Bruce Willis) hasn’t heard from his son Jack (Jai Courtney) in years, and he now finds out that Jack has been arrested for murder in Russia. So John flies to Moscow to help, if possible. But as he arrives at the courthouse, a bomb explodes and Jack makes a run for it, together with political prisoner Komarov (Sebastian Koch). Turns out that there is more to the story than a delinquent son and John finds himself in the middle of it.

Oh boy. I think the most positive thing I can say about this movie that it’s at least not as racist and misogynistic as Live Free or Die Hard. But everything else… No. Just no. There is really nothing redeeming about it.

END_OF_DOCUMENT_TOKEN_TO_BE_REPLACED

Plot:
After the FBI has been hacked, John McClane (Bruce Willis) is supposed to bring in Matthew (Justin Long), a suspected hacker. What should be a routine pick-up and drop-off, ends up in a full-blown shoot-out. And suddenly McClane finds himself right in the middle of the biggest hack of the century, trying to avoid the complete dismantling of the financial system.

After I actually liked the third Die Hard movie, I thought that I had finally hit my stride with these films. Unfortunately McClane is totally unhinged in this film, and they liberally peppered the script with misogyny and racism. That is not cool.

END_OF_DOCUMENT_TOKEN_TO_BE_REPLACED

Plot:
When Abraham (Benjamin Walker) was a child, he had to watch as the vampire Jack Barts (Marton Csokas) killed his mother. Years later, still filled with thoughts of revenge, he tries to kill Barts and has to be saved by Henry Sturgess (Dominic Cooper) who then goes on to teach him how to fight vampires – but on the condition that Abe only kills the vampires Henry points out. After training is over, Abe moves to Springfield where he works for Joshua Speed (Jimmi Simpson) as a store clerk, studies law and kills vampires. But his thirst for revenge is still not satisfied.

Abraham Lincoln: Vampire Hunter is absolutely trashtastic. By which I mean, it is not a good movie, in fact quite the opposite, but it is an extremely entertaining one.

END_OF_DOCUMENT_TOKEN_TO_BE_REPLACED

Plot:
Will (Michael Angarano) is the son of the Superhero couple, Jetstream (Kelly Preston) and The Commander (Kurt Russell). Unfortunately, Will himself doesn’t seem to have any superpowers. Which wouldn’t be that much of a problem if his first day at Sky High wasn’t coming up, the Superhero High School. Pressure is on: with parents like that, everybody expects great powers from him. When he gets there with his best friend Layla (Danielle Panabaker) and his powers still don’t kick in, things seem to go from bad to worse.

Sky High is a pretty standard high school movies and despite the added superpowers and the occasional poking fun at superhero tropes, it doesn’t really get geeky or even nerdy. Nevertheless it’s nice and fun. 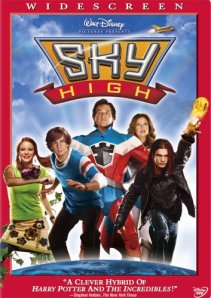 END_OF_DOCUMENT_TOKEN_TO_BE_REPLACED

Plot:
Scott (Michael Cera) is finally getting back into dating after a bad break-up. So he has a kind of non-relationship with high school student Knives (Ellen Wong). But then he meets Ramona (Mary Elizabeth Winstead) quite literally the girl of his dreams. They hit it off but then Scott learns that Ramona has seven exes he needs to defeat before he’ll be allowed to actually date her.

I very much expected to like Scott Pilgrim. But while I liked bits and pieces, the immensly crappy gender politics of it all overshadowed everything and drained the movie of all enjoyment. 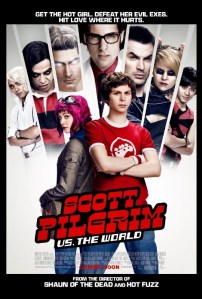