I watched Cloverfield (at a time where I didn’t yet review everything so there’s no review to link to) and I wasn’t particularly taken with it. The fact that 10 Cloverfield Lane was belatedly constructed as a prequel to it was therefore not really a point of attraction to me. Be that as it may, 10 Cloverfield Lane can stand on its own and for me, it stands better than Cloverfield did anyway.

What I loved most of all was the fact that there actually is a danger outside and we get to know that pretty quickly. While the film plays with the expectation that, really, there is nothing out there, it’s just a trick, it doesn’t go with that explanation – which would have felt a little tired to me. Nor does it keep you in the dark as long as it can, to make a final gasping reveal in the last seconds of the film. None of that. But the fact that there is something on the outside doesn’t automatically mean that Howard was straightforward about everything else or that he doesn’t have a hidden agenda. And then it really becomes a question of risk calculation: where does Michelle think the danger is bigger? 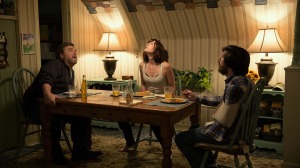 Trachtenberg has a good handle on the film and there are only occasional slip-ups in pacing and story. Why Michelle was tied up in the beginning of the film was never convincingly explained, the way that Emmett is disposed of was way too obvious and the old trope of the bad guy always coming back once more when you don’t expect it anymore (except you do) should have stayed home. But these things come and go pretty fast in an otherwise gripping and well-paced film that manages to keep up the tension through most of its parts.

That this works out so well is also due to the great performances, particularly by John Goodman and Mary Elizabeth Winstead. The movie focus very much on them and they nicely play off each other, showing more versatility than we’re used to getting from either, providing much of the entertainment the film provides.