Plot:
Rob Bilott (Mark Ruffalo) is an environmental defense attorney, working mostly for corporations faced with complaints. That’s why he is very reluctant to take on the case brought to him by farmer Wilbur Tennant (Bill Camp) who came to him because he know his grandmother. But Tennant’s story keeps gnawing at Bilott and when he digs a little deeper, he realizes that there may be more to the story. This realization is the beginning of a legal battle against chemical giant DuPont who has been polluting the entire area – a battle that will last for decades and affects thousands of people.

Dark Waters is a solid film. Given the cast and the subject matter, it had the potential to be more than just solid, but there are definitely worse movies out there.

END_OF_DOCUMENT_TOKEN_TO_BE_REPLACED

Plot:
Gerry (Brad Pitt) used to work as an investigator for the UN, but retired to be with his kids (Sterling Jerins, Abigail Hargrove) and wife Karin (Mireille Enos). It all goes well until the zombie apocalypse happens. As the world is overrun, Gerry’s former boss Thierry (Fana Mokoena) calls him back to duty and asks him to try and find out how the infection spread and how they could possibly stop it.

I loved the book, but from everything I read about the movie before seeing it, I knew not to expect it to be as good. Nevertheless I was still surprised by how bad this film was. 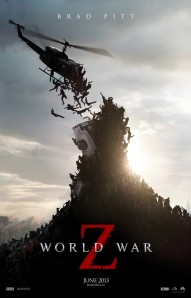