Plot:
When Cataleya (Amanadla Stenberg) is a kid, her parents are murdered for trying to leave Don Luis’ (Beto Benites) drug cartel in Bogota. Cataleya manages to escape to the USA where she moves in with her uncle (Cliff Curtis). Her only wish is to take revenge, so she grows up to be an assassin. Her uncle arranges the hits, while Cataleya – now grown up (Zoe Saldana) – does the killing. But she uses these murders to draw attention to herself, in the hope to make Don Luis and his henchman Marco (Jordi Mollà) come to her that way.

Colombiana was a really bad film – and it didn’t even have the decency to be funny with it. Though there were moments. 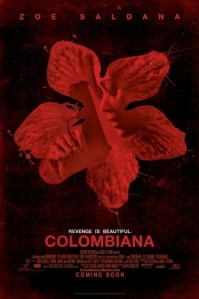 END_OF_DOCUMENT_TOKEN_TO_BE_REPLACED

Plot:
Henry (Matt Bush) is on the best way to finish High School as the valedictorian, when the spelling bee champion on his school gets stoned before the championship and triggers an anti-drug campaign led by the principal (Michael Chiklis): He wants compulsory drug tests for all the students. Usually that wouldn’t be a problem for Henry, but just the day before the principal announces this, Henry gets together with his old friend Travis (Sean Marquette) [who has the wonderful last name Breaux] and smokes his first joint. Out of desperation, Travis and Henry hatch the plan to drug the whole school. For that, they only have to steal from the drug dealer Psycho Ed (Adrien Brody). Who’s called Psycho for very good reasons.

I’m usually not so much for stoner movies, but Adrien Brody pulled me into this one – and it was actually really entertaining. The story is really predictable, but it had some very nice touches and good jokes.