Plot:
The Suicide Squad has some new recruits and a new mission on Corto Maltese. Instructed by Amanda Waller (Viola Davis), they are dropped off on the island that recently saw a regime change. And so, Bloodsport (Idris Elba), Peacemaker (John Cena), Harley Quinn (Margot Robbie), RIck Flag (Joel Kinnaman), Ratcatcher 2 (Daniela Melchior), Polka-Dot Man (David Dastmalchian) and King Shark (Sylvester Stallone) find themselves on different paths to the island capital to gain control of a secret weapon in a stronghold in the city.

END_OF_DOCUMENT_TOKEN_TO_BE_REPLACED

Plot:
After his success with Zeus’ lightning bolt Percy (Logan Lerman) has yet to have another big success, much to his chagrin and Clarisse’ (Leven Rambin) enjoyment. But then things get quickly out of whack: Percy’s half-brother Tyson (Douglas Smith), a cyclops, shows up. Camp Half-Blood is attacked by the not-dead-after-all Luke (Jake Abel) and its magical barrier starts failing. It’s Clarisse who gets tasked with finding the Golden Fleece to save the camp, but fueled by a prophecy Percy, Tyson, Annabeth (Alexandra Daddario) and Grover (Brandon T. Jackson) go on the same quest.

Sea of Monsters, much like the first film, was pretty nice the most time, but also ultimately not great or awesome. There is nothing really wrong with it and it did have a great supporting cast, but I didn’t connect with it all that much. 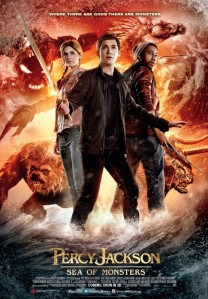 END_OF_DOCUMENT_TOKEN_TO_BE_REPLACED

Plot:
Ever since he was a little kid, Mike (Billy Crystal) dreamed of becoming a scarer. Even though he’s not particularly scary, he applied himself and got into Monsters University. But competition is fierce and there are just some scarers who seem more naturally suited to the task – like Sully (John Goodman). The two of them quickly become rivals, until circumstances force them to work together.

Monsters University was nice. It was not as good as the first one, but the sequels rarely are. And it had enough good things to keep you very entertained.

END_OF_DOCUMENT_TOKEN_TO_BE_REPLACED

Plot:
Frank (Rainn Wilson) has a pretty crappy life. The only thing he really loves about it is his wife Sarah (Liv Tyler). And then Sarah leaves him for the shady Jacques (Kevin Bacon) and Frank’s life completely falls apart. While watching some religious propaganda, Frank has an epiphany: he will become a superhero, save Sarah and win her back that way. Thus Crimson Bolt is born, despite Frank not really being the heroic type. So it comes as no surprise that things start going wrong very quickly.

Super is a to me rather controversial movie. It’s like Kick-Ass but with a morale I can agree with even less. If it wasn’t for the ending – and the way the audience around me reacted to it – I’d say that it’s pretty damn perfect. But as is, I have to show some more restraint.

END_OF_DOCUMENT_TOKEN_TO_BE_REPLACED

Plot:
A meteorite crashes in the woods close to a small town. The rather unpleasant Grant (Michael Rooker) stumbles upon it and is subsequently taken over by the alien that came with the meteorite. The alien uses Grant to make his plan of world domination happen, which at first mainly manifests in Grant hoarding and eating loads of meat. Grant’s wife Starla (Elizabeth Banks) and the town sheriff Bill (Nathan Fillion) notice that something is wrong and try to find out – and stop – what’s going on.

Slither is an amazingly funny send-up of and homage to B-movie horror comedies. It’s gory, but never really scary and I just laughed my ass off. Best seen with friends and probably alcohol, but it should definitely be seen.

END_OF_DOCUMENT_TOKEN_TO_BE_REPLACED

Okay, that’s it. You know now that I spend WAY too much time watching TV shows. Anything you can recommend or would like to warn us about? Comment away!

I just watched Waitress. Now that is a happy feeling film. You know, one of those that leave you with this warm, fuzzy feeling in your belly and make you smile uncontrolably…

Adrienne Shelly was not only a good director (I especially liked the scenes where Keri Russell aka Jenna always has the same facial expression during five or so different takes), she also was a very good writer. The dialogues are beautiful, funny and witty. Do I need to say more than: “I was addicted to saying things and having them matter to someone.”?

There are some actors I like and am always kind of glad to see, although they mostly chose crappy movies and/or roles to play and this movie had two of them: Jeremy Sisto (ever since Clueless) and Nathan Fillion (ever since Buffy). It was nice to see them doing a good film for a change.