Plot:
Limehouse, London has turned into a terrifying place after a series of murders has taken place. Inspector John Kildare (Bill Nighy) is finally called in to investigate and he senses a connection to music hall star Elizabeth Cree (Olivia Cooke) who has been accused of poisoning he husband on the very night of the last of the killings. He starts interviewing Lizzie and is soon determined to solve both cases.

The Limehouse Golem is okay, neither particularly great, nor particularly bad – although it would have probably benefitted from a push in either direction. As is, it is a little too bland to be really memorable.

END_OF_DOCUMENT_TOKEN_TO_BE_REPLACED

Plot:
Eric (Colin Firth) meets Patti (Nicole Kidman) by chance on a train and the two of them immediately hit it off. a short while later they get married and Pattie discovers that Eric is still stuck in his war experiences: as a young man (Jeremy Irvine), he was a prisoner in a Japanese labor camp for a good while and is now suffering from PTSD. When his best friend Finlay (Stellan Skarsgard) brings him a news report that shows his tormentor from back then, Takeshi (Hiroyuki Sanada), now working at a memorial of the labor camp and Eric decides to go back and make him suffer.

Railway Man is way too long and has so many issues I couldn’t like it one bit, despite the great cast. 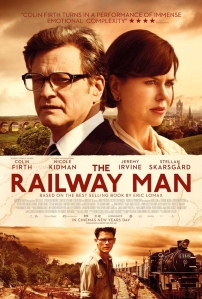 END_OF_DOCUMENT_TOKEN_TO_BE_REPLACED

Plot:
George Pemberton (Bradley Cooper) has a successful timber business and things seem to work out perfectly when he meets Serena (Jennifer Lawrence) on a trip. They fall in love and get married quickly and when George brings Serena back home, she immediately gets involved in the business, into which she has some insight. But not everybody is so happy about the new alliance and the intensity of George’s and Serena’s relationship also proves difficult.

Serena starts off well enough but then it pretty much implodes, leaving me feeling like it didn’t actually know what story it wanted to tell in the first place.

END_OF_DOCUMENT_TOKEN_TO_BE_REPLACED

Plot:
Thomas Reddmann (Nicholas Hope) was convicted of killing several people. After an escape attempt, it appears that he died. But a short while later, Annabelle (Kelly Paterniti), one of the most important witnesses in the murder case, is kidnapped and finds herself chained to a desk with five other people, all also involved in the case. And Reddmann is behind the kidnapping. His plan is to have his “human resources” prove his innocence. By any means necessary.

I expected the movie to be different and I think I would have preferred my version. But it was entertaining, though yet again a movie were the ending just didn’t work out for me.

END_OF_DOCUMENT_TOKEN_TO_BE_REPLACED

Plot:
Edward De Vere (Rhys Ifans) is the Earl of Oxford and as such it is very much frowned upon that he writes plays, even though the aging Queen Elizabeth (Vanessa Redgrave) loves (his) plays very much. But Edward has the idea of letting the rather unknown writer Ben Jonson (Sebastian Armesto) take credit for his plays. But instead the obnoxious actor William Shakespeare (Rafe Spall) puts his name to it – and that is only where the trouble starts for Edward.

Holy crap, this movie was bad. I mean, I expected it to be bad, but I also expected it to be entertaining with it. But when I wasn’t headdesking, I was bored. Not what I think of as a good time. It does have its moments, but they are few and far between. 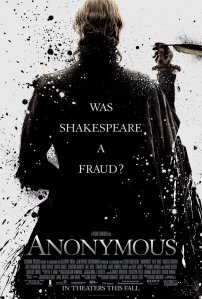