END_OF_DOCUMENT_TOKEN_TO_BE_REPLACED

Plot [with Spoilers for Hatchet]:
Marybeth (Danielle Harris) just barely escaped Victor Crowley (Kane Hodder) and she’s the only one from her group. She returns into town to ask Reverend Zombie (Tony Todd) for help. Zombie agrees and gets together a band of mercenaries for support. But there is more to his agreement to help than pure altruism and Victor Crowley is far from dealt with.

Hatchet II is a decent continuation of the series. It concentrates more on the gore and less on the sexism, which I appreciated. But it also rehashes a bit and makes the ending of the first movie worse in hindsight.

END_OF_DOCUMENT_TOKEN_TO_BE_REPLACED

Plot:
The world is changing and so are humans. Ever so slowly “mutants” are emerging – humans one step further in the evolution of things who have special powers. Marie (Anna Paquin) is one of them. When her power kicks in, she runs away from home and quite accidentally meets Logan (Hugh Jackman), another mutant. Together they end up at Professor Xavier’s (Patrick Stewart) school for mutants and get caught in the war that is brewing between Xavier, his old friend Eric (Ian McKellen) and the humans.

It’s been ages that I saw the film and I have to say that it holds its own quite well, even after all this time. Yeah, it has the occasional headdesk-worthy dialogue, but it’s fun, has a good cast and treats its premise with respect. Very enjoyable. 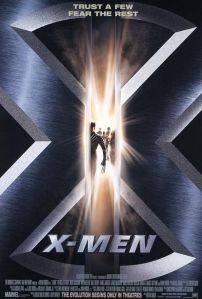