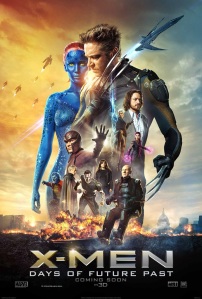 DoFP set itself no easy task: it wants to make the bad X-Men movies disappear, but keep the good stuff. Time travel always lends itself to universe resets, so they really went for it. Unfortunately, while the reset works pretty well, the ending isn’t quite as happy as they think it is, particularly not for Logan, who is left a stranger in his own life. He might have arrived at a better timeline, but he doesn’t remember the happy times, can’t work as a history prof anymore and has to start his entire life over. While he’s probably happy to sacrifice for Jean’s (Famke Janssen) life, it left a sour taste in my mouth.

The other thing that didn’t sit so well with me was the fact that they took Kitty’s story away from her. Wolverine has enough storylines of his own, is it really necessary that he becomes the hero of a story that featured one of the few women kicking ass? 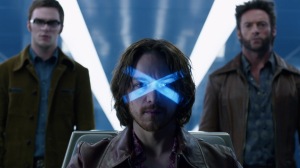 But other than that I really loved the film. It was funny, entertaining and exciting. The pacing was spot-on. I really liked seeing all the characters from the old films again and getting some (to the cinematic universe) new characters (though they were sometimes a little to cursory with introductions. If you didn’t know Warpath’s or Bishop’s powers, you probably wouldn’t know after the film either). Especially Quicksilver (Evan Peters) is a great addition and I do hope we get to see him again. Particularly because Evan Peters does a really good job (it will be interesting to compare him to Aaron Taylor-Johnson in Age of Ultron).

I just had a lot of fun with the film. Not everything is perfect, not everything is entirely logical, but those are minor points that don’t hurt the film’s entertainment value. 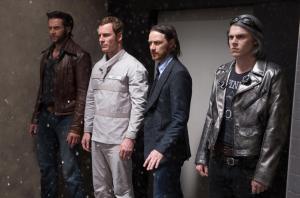