Plot:
In a Miami almost entirely drowned Nick (Hugh Jackman) and his employee Watts (Thandiwe Newton) run a small reminiscence business. Their clients come to relive their memories in the most realistic way possible with them. Everything changes for Nick the day that Mae (Rebecca Ferguson) comes in, hoping to find her lost keys. Nick and Mae become very close – until Mae disappears, leaving Nick scrambling to understand what happened with her, with them. Unable to let go, he digs into her past and uncovers more than he bargained for.

I had not realized going into the film that it was a noir set in the future. If I had, I may have liked it a little better, but fact is, I usually don’t like noirs and Reminiscence reminded me again why that is.

END_OF_DOCUMENT_TOKEN_TO_BE_REPLACED

Plot:
Han Solo (Alden Ehrenreich) has found his way off the planet Corellia in an attempt to find a better life, but quickly running out of options, his path has led him to the army. But he doesn’t do very well there, either. So it seems a lucky break that he finds Tobias (Woody Harrelson), Val (Thandie Newton) and Rio (Jon Favreau) – thieves pretending to be fighters. He tries to join them, but they are not interested, using him instead to make their own escape and getting Han arrested. But that arrest leads Han to Chewbacca (Joonas Suotamo) and Chewie buys him a way in with Tobias and the others after all. And pretty soon, Han finds himself in the middle of a heist that throws him right in the path of Qi’ra (Emilia Clarke) whom he thought he had lost forever.

Speaking as somebody who is not particularly into Star Wars, Solo was entertaining enough although I felt that it definitely focused on the wrong character.

END_OF_DOCUMENT_TOKEN_TO_BE_REPLACED

Plot:
Ethan Hunt (Tom Cruise) is tasked with retrieving the stolen Chimera virus: a supervirus that kills within a short amount of time. To get it, he is supposed to recruit thief Nyah (Thandie Newton), but as it turns out not for her skill set but rather for the fact that she used to date Ethan’s former co-agent who is responsible for the theft of the virus, Sean Ambrose (Dougray Scott). Ethan is uncomfortable involving Nyah in all of this, especially since he finds himself falling for her.

Holy fuck, I had forgotten how absolutely atrociously bad Mission: Impossible II is. It’s abysmal. It’s frankly astounding that they ever got to make another film in the franchise because this film was certainly bad enough to irrevocably kill it.

END_OF_DOCUMENT_TOKEN_TO_BE_REPLACED

Plot:
Scientists make a discovery: the world is ending in 2012, the Mayans were right. So, the most powerful men of the world hatch out a plan, don’t tell anyone about it and then in 2012, one righteous man tries to save his family.
Honestly, who cares about the plot? The plot is not important.

2012 delivers what Roland Emmerich promised in Independence Day and The Day After Tomorrow: Nobody can destroy the earth just like he does. You just need to ignore the science (ridiculous), the story itself (been there, seen that times one hundred) and the (mostly) mediocre acting and enjoy the Special Effects. Since nothing about this movie is outrageously offensive, that’s easily done. 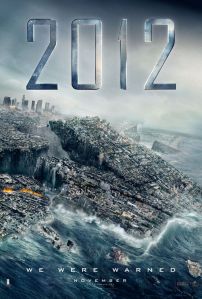 END_OF_DOCUMENT_TOKEN_TO_BE_REPLACED

W. is the new movie by Oliver Stone, which was released directly to TV, at least here in Austria. It chronicles the life of George W. Bush from his college time to the end of his first period as president of the United States in 2004.