The Road is arguably Cormac McCarthy‘s most famous novel. It won the Pulitzer Prize.

Plot:
A father and a son travel through a post-apocalyptic landscape. They’re constantly looking for food, trying to protect themselves from the cold and from what is left of the human population, most of which have turned seriously dangerous.

I don’t know if you can say that I liked the book, or that anybody liked it, for that matter. I mean, it’s exceptionally good, but it’s also exceptionally depressing and bleak. Every second page made me cry. Because of that, I’d urge everyone to read it. Just keep chocolate close. 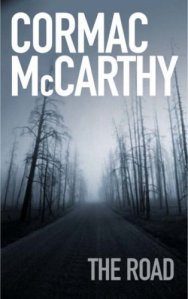 I don’t think I’ve read anything more heartbreaking than this book in quite a while. Seriously, it’s completely devastating. Not only the state of the world and how you never actually know what caused the whole thing, but the relationship between the father and the son which is at the same time really sweet, but also brutal.

And the complete pointlessness of their goal – they try to find the sea, the coast, but what for? What do they expect to find there that is so much better than anywhere else? And when they find nothing, how can they stand to go on?

And all this written in prose that on the one hand fits the whole setting perfectly, but on the other hand it’s strangely  lyrical for such a ruined and bleak world.The only thing I found mildly annoying was the completely arbitrary use of apostrophes. But you get used to that.

They scrabbled through the charred ruins of houses they would not have entered before. A corpse floating in the black water of a basement among the trash and the rusting ductwork. He stood in a livingroom partly burned and open to the sky. The waterbuckled boards sloping away into the yard. Soggy volumes in a bookcase. He took one down and opened it and then put it back. Everything damp. Rotting. In a drawer he found a candle. No way to light it. He put it in his pocket. He walked out in the gray light and stood and he saw for a brief moment the absolute truth of the world. The cold relentless circling of the intestate earth. Darkness implacable. The blind dogs of the sun in their running. The crushing black vacuu of the universe. And somewhere two hunted animals trembling like groundfoxes in their cover. Borrowed time and borrowed world and borrowed eyes with which to sorrow it.