Plot:
Sherlock Holmes (Robert Downey Jr.) and his partner Dr. Watson (Jude Law) arrest Lord Blackwood (Mark Strong) who is doing some black magic (including the sacrificing a virgin part). Blackwood gets sentenced to death and hanged. But it seems that it’s not the last we’ve seen of him.

Sherlock Holmes is fun. The plot sucks all kind of ass and the movie would have probably been better without any plot altogether. Guy Ritchie has already done better work. But the dialogues were good and Robert Downey Jr. and Jude Law played with so much verve that it hardly mattered.

You know what was so awesome about the film that it obliterated everything that was bad about it? Here’s a movie that caters to its slash audience… The sexual tension between Holmes and Watson can practically be bottled. And all of that with the faces of Robert Downey Jr. and Jude Law? Makes me very happy and fuels so many dreams… *sigh*

And the dialogues were great. Funny banter – what else could you wish for in a movie like this? Yes, it will never stimulate you intellectually, but it does make you laugh.

But of course, not everything was great. As I said before, Guy Ritchie usually does better (except maybe for Swept Away, which I haven’t seen). And Mark Strong (and his tooth) was completely unnecessary and just didn’t act very well.

And the plot was just completely ridiculous. Better to ignore it altogether. 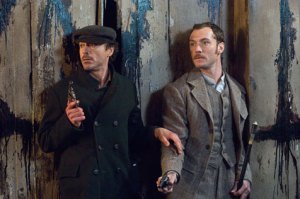 Summarising: If you expect nothing more than entertainment, you’ll find everything you want here.