Plot:
Professor Jack Randall (Eric Balfour) is in a rut. His last publication on gargoyles has been widely discredited by the scientific community and ever since, he hasn’t been able to write or publish anything. His friend Carol (Tanya Clarke) tries to get him out of the hole and brings him to a church taht is currently being renovated. There in the basement, workers have uncovered something that she hopes will make Jack excited about his work again. But as they quickly find out: the discovery is neither historical nor theoretical.

Rise of the Gargoyles is a schlockfest that, I think, was just a little too serious to achieve Sharknado-like quality. It’s not good in any sense of the word, but there is some entertainment to be had here.

END_OF_DOCUMENT_TOKEN_TO_BE_REPLACED

Plot:
In the near future, there are barely any people left – most of them have been turned into zombies. Among the survivors are Columbus (Jesse Eisenberg) and Tallahassee (Woody Harrelson) who stumbled upon each other by chance and decided to stick together for a while, though the obsessive and anxious Columbus and the toughtalking, explosive Tallahassee don’t have much in common. When they run into Wichita (Emma Stone) and Little Rock (Abigail Breslin), the girls first rob them, but later on, they throw their lot together, hoping to reach a place where they’re safe.

When I saw Zombieland for the first time (almost a decade ago), I was utterly cahrmed by it. Re-Watching it now, I have to admit that it lost a bit of its sheen, but it’s still pretty entertaining.

END_OF_DOCUMENT_TOKEN_TO_BE_REPLACED

Thee Wreckers Tetralogy consists of four animated short films made between 2009 and 2018, starting life as music videos for Thee Wreckers. They are supplemented by a documentary about the films and the band.
The four short films are: No Place Like Home (2009), Lonely Bones (2013), Splintertime (2015), Reruns (2018)
Director: Rosto
Writer: Rosto
The documentary is: Everything’s Different, Nothing Has Changed (2017)
Director: Joao MB Costa, Rob Gradisen
Part of: /slash Filmfestival
Seen on: 22.9.2018
1-gif-review

I hadn’t heard of Thee Wreckers and I really didn’t know what I was getting myself into with these films, but I admit that I found the films, the animation, the music of the short films pretty mind-blowing. The animation’s aesthetics, the music and the dreamlike narrative style caught me just right and I really managed to lose myself in them. Even though each installment of the tetralogy is very different, they go together very well and make for an all around beautiful body of work.

Read a little more about each of the short films after the jump.

END_OF_DOCUMENT_TOKEN_TO_BE_REPLACED

Plot:
Abby (Katherine Heigl) is a producer of a morning show. Due to faltering ratings of said show, her boss hires Mike (Gerard Butler), whose claim to fame is hosting The Ugly Truth, a show that tackles matters of relationships in a very male, if not misogynistic way. Abby is outraged at this choice of host. But since she herself doesn’t do very well in matters of relationships either, pining after her neighbor Colin (Eric Winter) who she thinks of as the perfect man, she strikes a deal with Mike at his suggestion: he will help her reel in Colin, and she will work with him.

The Ugly Truth is absolutely horrible. It bowled me over with its hatred masquerading as some good old fun. It’s sexist and misogynistic. It’s so bad, it even makes a case that misandry does, in fact, exist. I hated it.

END_OF_DOCUMENT_TOKEN_TO_BE_REPLACED

Plot:
Margaret (Sandra Bullock) is a good editor and she loves her job. She is not so much a good boss as her assistant Andrew (Ryan Reynolds) knows from his own experience. When the Canadian Margaret is confronted with the fact that she might be deported because her visa expired, she pressures Andrew into marrying her. But the immigration officer Mr Gilbertson (Denis O’Hare) isn’t convinced, so they can’t just leave it at the formalities. That’s how Margaret ends up at Andrew’s grandmother’s 90th birthday party. With his welcoming family and the two of them in a decidedly unworklike environment, their relationship starts to change.

The Proposal is cute, if you manage to ignore a lot of things about it (heteros are exhausting). I enjoyed it while it lasted, but it won’t become a favorite or a film I’ll revisit at all. 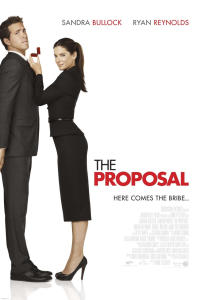 END_OF_DOCUMENT_TOKEN_TO_BE_REPLACED

Plot:
Sandy’s (Catherine Zeta-Jones) live fell apart after she discovered that her husband of many years cheated on her. Now she’s living in a new apartment above a coffee shop with her kids and tries to get a fresh start in life. Aram (Justin Bartha) who is a barista in said coffee shop may be much younger than Sandy, but his life is at a low point as well. Having just got out of a relationship that turned out to be a green card scam, he doesn’t really know what he wants to do with his life. When Sandy ends up hiring him as a babysitter, they become closer and even start dating. But are they really just rebounds for each other?

I liked the idea of The Rebound, what with the older woman dating a younger man and it not being portrayed as cougar-like predatory behavior. Or at least that’s what I expected. But The Rebound is so quintessentially male in its perspective, I could barely stand it.

END_OF_DOCUMENT_TOKEN_TO_BE_REPLACED

Plot:
Coraline Jones (Dakota Fanning) moves with her parents (Teri Hatcher, John Hodgman) to a new house. Her parents are always busy so Coraline is left to explore things alone. One day she discovers a hidden door in her house and when she goes through, she meets her Other Mother, who is everything a child could hope for and more. But her Other Mother has buttons for her eyes. She wants Coraline to stay, but for that, Coraline will need to give up her eyes as well…

Coraline is a sweet and very beautiful film, although not unproblematic in some things. I liked it, but with a little more reservation than the first time round.

END_OF_DOCUMENT_TOKEN_TO_BE_REPLACED

Plot:
Bliss’ (Ellen Page) mother Brooke (Marcia Gay Harden) has been raising Bliss to participate in beauty pageants. But Bliss has no interest whatsoever in being pretty or in pageantry. That becomes even clearer to her when she discovers roller derby. On a whim she goes to a match, and falls in love immediately. After talking to team captain Maggie Mayhem (Kirsten Wiig), she decides to try out for the team herself. Despite the fact that her parents can’t know about it or that she isn’t the required 21 years old yet. So she dons skates and starts practicing, findig her place in the team and the world.

Whip It is a sweet film, with a lot of fun moments and it wouldn’t surprise me if it made at least half of its audience fall in love with roller derby. There’s one big draw back though – and that’s the fact that they didn’t dare to make this a queer story. But other than that I enjoyed it a lot.

END_OF_DOCUMENT_TOKEN_TO_BE_REPLACED

Plot:
A spanish drugdealer forgot a bag in Poland, so he asks his partner/employee Harry (Detlev Buck) who works in Vienna to retrieve it for him. Harry passes on the job to Schorsch (Georg Friedrich) who in turn asks Mao (Pia Hierzegger) because he wants to watch the 24 hour Le Mans race. But Mao has to babysit, so she sends Max (Michael Ostrowski) and Johann (Raimund Wallisch) to do it instead. But those two can’t necessarily be trusted, and Harry is anxious to see the bag home safe and sound. While Max and Johann think of the entire thing as a nice adventure and an excellent opportunity to make some much-needed cash, Harry convinces Schorsch to follow them and make sure that they fulfill their mission.

Contact High is often funny and sometimes stronger than Nacktschnecken, but for the most part it’s clearly weaker.

END_OF_DOCUMENT_TOKEN_TO_BE_REPLACED

Plot:
Samir (Aasif Mandvi) loves cooking but his career as a chef seems to have hit a dead-end. So he has decided to go to Paris for a while and get some fresh wind into his cooking. Unfortunately that’s when his father (Harish Patel) has a heart-attack and Samir has to take over the family restaurant, a dingy Indian place. So far, Samir has always avoided engaging with Indian food, but facing the very real possibility of the restaurant having to close, he digs in with the help of cab driver and former chef Akbar (Naseeruddin Shah) who seems to have done everything at least once in his life. And maybe going back to his roots is just what Samir needs for his own cooking.

Today’s Special is a sweet film with lively characters. Plotwise there’s not much that can’t be seen from a mile away, but that’s not a bad thing if you simply want some nice entertainment. Which is exactly what you will get from this film.