Plot:
Sandy’s (Catherine Zeta-Jones) live fell apart after she discovered that her husband of many years cheated on her. Now she’s living in a new apartment above a coffee shop with her kids and tries to get a fresh start in life. Aram (Justin Bartha) who is a barista in said coffee shop may be much younger than Sandy, but his life is at a low point as well. Having just got out of a relationship that turned out to be a green card scam, he doesn’t really know what he wants to do with his life. When Sandy ends up hiring him as a babysitter, they become closer and even start dating. But are they really just rebounds for each other?

I liked the idea of The Rebound, what with the older woman dating a younger man and it not being portrayed as cougar-like predatory behavior. Or at least that’s what I expected. But The Rebound is so quintessentially male in its perspective, I could barely stand it.

The Rebound may not be a portrayal of the stereotypical cougar who more often than not is a male fantasy masqueraded as a self-determined woman who goes after what she wants. But Sandy is still less of an actual character and more of a fantasy: she looks great, of course; she’s a sports buff; she’s just vulnerable enough to be attainable; but above all she’s sexy sexy sexy.

To be fair, though, Aram is also the embodiment of a fantasy – yet again a male fantasy, though. He is the glorified mediocre dude. He doesn’t really have much to show for himself; he doesn’t actually have much of a personality; but he is good with kids and he is a nice guy. And honestly, I am not the person who thinks that guys need to be competitive and ambitious and make big careers, but the way the bare minimum in being a decent human being is celebrated here didn’t convince me either.

Even though the two main characters were so problematic for me, there were moments here and there where the sweet film this really could have been shines through and that I honestly enjoyed. I can also imagine worse things than watching Catherine Zeta-Jones for an hour and a half because hot damn.

But overall, the Rebound just didn’t make me happy like a romantic comedy should make me happy. It was too bland and too male in its outlook for that. 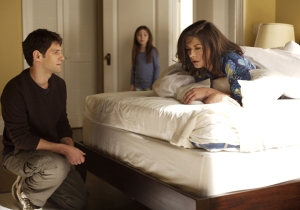