Plot:
Ferdinand (Colin H. Murphy) is the son of a famous fighting bull and is expected to follow in his father’s footsteps. Or rather hoofsteps. But nothing could be further from Ferdinand’s mind: he is more interested in smelling the flowers, bringing him the scorn from the other young bulls. Ferdinand grows up (John Cena) into a formidable bull and as luck would have it, he gets stung by a bee, causing him to go on a rampage that brings him directly to the matador academy to train as a fighting bull.

Ferdinand is a sweet film that works hard to dismantle toxic masculinity in a way that makes sense for kids – and it does so quite admirably. 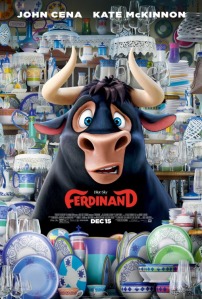 As a kid, I watched the old short film of Ferdinand and I really loved it. So when I heard that they had made another adaptation, I was curious to see it. And I have to say that I really enjoyed the version they made here, even if it was a little too lengthy. Due to it being a feature film, the story is much more fleshed out with more characters and a lot more shenanigans. They did a good job there mostly, although it wouldn’t have hurt if a couple more of those new characters had been women or girls. But since the film is most occupied with what it means to be a man, the lack of female characters shall be forgiven, especially since the female characters there are, are very nice.

Ferdinand is interesting with its take on masculinity. It’s not necessarily subtle or overly complex, but given that the entire thing is set in Matador culture in a way that emphasises how it is very much about hegemonic masculinity that turns so quickly into toxic masculinity (the line between the two is thin and might be non-existent) and has a protagonist that goes completely against that culture of masculinity, it’s still groundbreaking.

Ferdinand is caring, empathetic, emotional, non-competitive and peaceful. It’s a reason for him to get bullied, but that bullying is never cause for him to doubt that he is right just the way he is (or that he isn’t male). And the bullying is shown to be the result of a culture of masculinty that doesn’t allow men or boys to express their emotions and that puts too much weight on power, strength and competition.

Boys (and girls, too) can do with a take on gender roles like this. That it’s wrapped in a sweet, fun package that is very nice to watch is a bonus, making Ferdinand an overall good, albeit not perfect experience.