Plot:
Samir (Aasif Mandvi) loves cooking but his career as a chef seems to have hit a dead-end. So he has decided to go to Paris for a while and get some fresh wind into his cooking. Unfortunately that’s when his father (Harish Patel) has a heart-attack and Samir has to take over the family restaurant, a dingy Indian place. So far, Samir has always avoided engaging with Indian food, but facing the very real possibility of the restaurant having to close, he digs in with the help of cab driver and former chef Akbar (Naseeruddin Shah) who seems to have done everything at least once in his life. And maybe going back to his roots is just what Samir needs for his own cooking.

Today’s Special is a sweet film with lively characters. Plotwise there’s not much that can’t be seen from a mile away, but that’s not a bad thing if you simply want some nice entertainment. Which is exactly what you will get from this film. 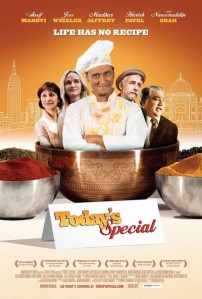 One day somebody may write a very insightful paper on why being a chef is such a popular occupation for movie characters to have. My personal theory is that cooking lends itself so nicely to so many metaphors while food is such an integral part of pretty much everybody’s life. In any case usually we get movies with male chefs in a life crisis and cooking imparts important life lessons to us (I’m thinking of Chef, or Comme un chef, or Burnt, or The Hundred-Foot Journey, and that’s just off the top of my head). Today’s Special neatly fits in with all of those films.

The plot develops just as you’d suspect it to develop. Samir develops just as you’d suspect it, too. Other characters don’t really get much development at all. Akbar is pretty much the equivalent of a fairy godmother, breezing into the story and making everything good, while Carrie (Jess Weixler) remains mostly non-descript as Samir’s love interest. In a twist of the usual racial politics in films, she seems to mostly be there to provide another facet to Samir’s complicated relationship with his own cultural heritage by being white.

The way the film looks at the relationship Samir has with all things Indian is certainly the movie’s strongest point. The film raises questions of authenticity and identity and how people can deal with being caught between two worlds. For Samir, it was always trying to assimilate to New York and the USA, fearing so much that he may do something that will mark him as an Indian, an outsider even mroe that he can’t even bring himself to deviate from recipes. It’s only when he accepts his own background and influences that he can be really successful – which is an interesting to point to make for the film, I think.

It’s also not something that is discussed all that often in films, so it not only sets the film apart, but provides a counterweight for an otherwise pretty run of the mill affair, making me enjoy the film even more, even if it failed to ellicit much enthusiasm from me. 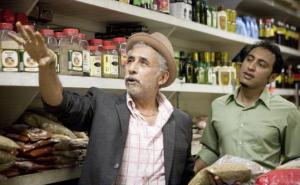