Plot:
Carl Casper (Jon Favreau) is a passionate chef, but his boss Riva (Dustin Hoffman) wants him to stick with the tried and tested menu – always. That brings him an abysmal critique by Ramsey Michel (Oliver Platt), the most important food critic. After fundamentally misunderstanding twitter, Carl transform that critique into a public feud with Michel, ultimately leading to him losing his job. Suddenly Carl has all the time in the world. Taking a recommendation from his ex-wife Inez (Sofia Vergara), he goes back to his roots and re-builds his career with a food truck that he takes on a cross-country tour, helped by his son Percy (Emjay Anthony) and his friend Martin (John Leguizamo).

Chef was an entertaining film, although it felt to me like Favreau made a film where he out-latinos all the latin@s in it – which was very weird, if not to say problematic.

Looking at the cast list, all I could think about was that it must be very nice to know half of Hollywood and to get them to participate in your film – even if it meant that most of them showed up for a couple of scenes and then were never seen again, which feels a little like a waste. That was especially true for the women. Scarlett Johansson played the most underdeveloped character in the entire film, and one of her scenes consisted of her being artfully draped on a bed, watching Carl cook in a scene that was apparently supposed to show some kind of sex appeal, but ended up being extremely weird and nothing else. Sofia Vergara’s Inez was basically Carl’s personal sexy cheerleader and not a fully-formed human being (the same is also true for Johansson’s Molly).

Since they were basically the only two women of any consequence in the film, that portrayal was pretty irritating, though not as irritating as the fact that Casper is a white guy. I think if he had been a latino, at least that part of the film wouldn’t have raised my eyebrows. But instead we got a film about how a white guy, who was married to a latina and his best friend is a latino and yet who speaks no Spanish at all, makes the best Cubano sandwich, helped by his faithful latino sidekick and cheered on by his latina wife. And he passes that knowledge on to his son – half latino, but who doesn’t speak a word of Spanish, at least not in the film. Very uncomfortable. [Also uncomfortable: a moment where Martin coerces some latino workers to help Carl heave a stove into his truck with the promise of a sandwich and a threat of reporting them to immigration if they don’t. Or at least that’s what I thought he said – my Spanish is not very good and there were no subtitles.]

But if you disregard that the film is cute and entertaining, if not particularly innovative. The characters ring true (particularly Carl, who reminded me a lot of my brother, who is also a chef), the pacing is nice and I liked how they included twitter into the story and the screen itself. Plus, John Leguizamo is always a bonus in any film.

In particular foodies will find a lot to love here as not only Carl is in love with food, the entire film is. Although it is a story about a father connecting with himself and his own son again, the most tenderness we get to see on screen, the biggest joys in character’s faces – it all comes from food. If you like food, you’ll love this. 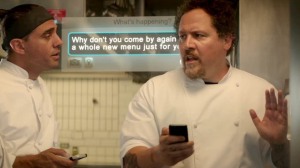 Summarizing: why not, if you don’t think too much about it.