Plot:
Maria Altmann (Helen Mirren/Tatiana Maslany) had to flee Austria during the Second World War because she’s Jewish, and has never returned there since she was exiled to the USA and lost most of her family to the Nazis. But after the death of her sister, Maria realizes that she has the responsibility to guard her family’s memories. And part of those memories is the painting of her aunt Adele (Antje Traue), painted by Gustav Klimt (Moritz Bleibtreu), that the Nazsi took from her home and that is now hanging in a federal Austrian museum. As the Austrian government just started hearing restitution claims, Maria asks lawyer Randol Schoenberg (Ryan Reynolds) for help with recovering that painting. They even travel to Austria together, where they meet journalist Hubertus Czernin (Daniel Brühl) who warns them that the Austrian government won’t be cooperative. That proves to be right and Maria and Randy have to dig in for a long fight.

After I read the first reviews, I didn’t expect Woman in Gold to be any good. But I was pleasantly surprised: it’s an engaging and well-made film that is only marred by the German used in the film. 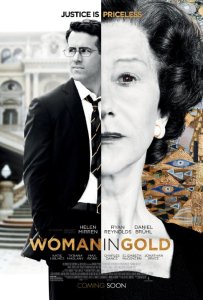 Admittedly my biggest point of contention – that the film was made practically without Austrian natives – is only a relevant point when you watch the film in English, but with Austrian sensibilities. But it still irritated me to the max. Not only is practically the entire main cast comprised of English native speakers (and while neither Mirren nor Maslany have a bad accent, it is obvious that they aren’t natives), the German native speakers they did cast are almost exclusively German and not Austrian – which furthered my annoyance. We do have excellent actors and actresses here in Austria, please use them.

Another thing that was interesting for me as an Austrian was to see Austrians painted as complete assholes. Usually we get off easy because people forget that not all Nazis were Germans. So to have this explicitely Austrian context (all those places in Vienna I recognized, one just around the corner from my uni institute, for example) was fascinating and not very far off the truth, I thought. [Another reason that I would have liked to hear Austrian German and not German German throughout the film.] 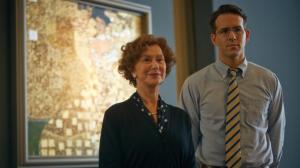 Helen Mirren was fantastic in the film (even though her brown contacts gave her a weird look), as was Tatiana Maslany. Nothing less is expected from either of those wonderful women. But I’m also happy to say that it was one of Ryan Reynolds’ good performances. The three of them make a beautiful emotional center for the film, each extremely relatable and likeable in their own right.

The story is fucked up beyond belief – and I don’t doubt it for a second. Austria tends to do everything to not feel responsible for anything regarding WW2 – and easy restititution would by the same as admitting guilt. We can’t have that, so it’s good that there are people like Altmann and Schoenberg who fought for it – and still do. 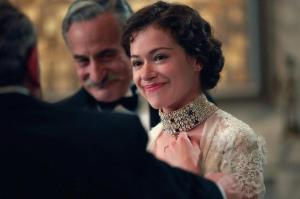