Plot:
A spanish drugdealer forgot a bag in Poland, so he asks his partner/employee Harry (Detlev Buck) who works in Vienna to retrieve it for him. Harry passes on the job to Schorsch (Georg Friedrich) who in turn asks Mao (Pia Hierzegger) because he wants to watch the 24 hour Le Mans race. But Mao has to babysit, so she sends Max (Michael Ostrowski) and Johann (Raimund Wallisch) to do it instead. But those two can’t necessarily be trusted, and Harry is anxious to see the bag home safe and sound. While Max and Johann think of the entire thing as a nice adventure and an excellent opportunity to make some much-needed cash, Harry convinces Schorsch to follow them and make sure that they fulfill their mission.

Contact High is often funny and sometimes stronger than Nacktschnecken, but for the most part it’s clearly weaker.

Where Nacktschnecken was a bit of a stoner comedy, Contact High is completely there, which is not the development I personally would have hoped for. I’m just not into stoner comedies. At least Contact High is pretty creative when it comes to showing the hallucinations and perceptions of Max and Johann.There were some fun ideas there.

I also liked that Schorsch and Harry got a bit more screen time in this film – they were one of the best things about the first film. This time, though, they make it more explicit that Harry is in love with Schorsch and flirts with him all the time – despite the fact that Harry is Schorsch’s boss and that Schorsch has to constantly say no (his “no”s range from not interested to explicitly homophobic). This feeds into the predatory gay man trope and is played for laughs, making the homophobic undertones that were present in the first film already equally more explicit. 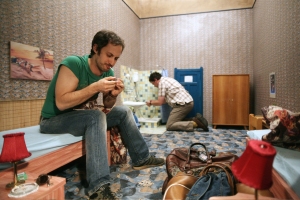 Additionally they basically wrote Mao out of the film and since Mao was more or less the only female character of consequence in Nacktschnecken, Contact High simply has no female characters of importance. Even Gretchen (Hilde Dalik) is only there because Max has a crush on her.

With those things it speaks to the strengths of the rest of the film and of the characters, who remain likeable, that I didn’t completely hate it but found it mildly interesting, and sometimes actually funny. But it won’t be my new favorite movie.

Summarizing: If you’re into stoner comedies, you’ll probably love it.