Plot:
Precious (Gabourey Sidibe) is 16 years old, fat, poor, can barely read or write and is pregnant with her second kid – both pregnancy consequences of her father raping her. She lives with her mother (Mo’Nique), who constantly abuses her. When her second pregnancy is discovered, Precious gets kicked out of school, but starts to attend a school cut to her needs and tries to build up a life.

The movie was good, of the Oscar-hype-movies certainly the most deserving. The cast was brilliant, the script fantastic [though I haven’t read the book, so I can’t compare] and Lee Daniels did a good job. 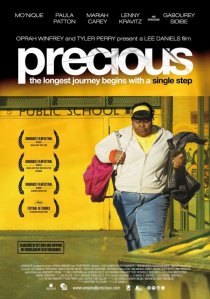 I was expecting to need a very stiff drink after the film, but actually it was only a half-stiff drink. [Instead I went to see The Blind Side. Because that’s how I roll. Also, because it proved logistically wise.] What I’m trying to say is this that even though the subject matter is far from nice or positive, the film manages to not end in total desperation. You won’t go out of it with a huge grin on you face, but you probably won’t want to slit your wrists either.

And that is due to the absolute great script by Geoffrey Fletcher. As I said before, I haven’t read the novel but Fletcher made one hell of script from it. Amazing stuff.

But not only Fletcher was amazing – the cast was, too. And not only Gabourey Sidibe and Mo’Nique, though they were both breathtaking, but also Paula Patton and – I didn’t think I’d say this – Mariah Carey.

With that arsenal, it seems like Lee Daniels didn’t have much to do – and thankfully he never goes on an ego-trip to prove the opposite. I’m sure that took a lot of self-restraint, but it was also really important.

Summarising: A very good film with a better cast and a poignant, tragic story you should definitely see.