Plot:
Malik (Tahar Rahim) is moved from juvie to normal prison. He doesn’t belong to any group (not religious enough for the muslims, too muslim for anybody else), which is why he’s quickly chosen by the Corse prisoners, under the leadership of César (Niels Arestrup), to carry out the assassination of another inmate. Against all odds, Malik succeeds. From then on, he’s under the protection of the Corse prisoners and slowly makes his way up in the prison world.

A Prophet is an excellent movie. The acting as well as the directing are strong in this one, but it remains surprisingly pointless. It’s 150 minutes long, and at the end you feel like saying, “wait, that’s it?” 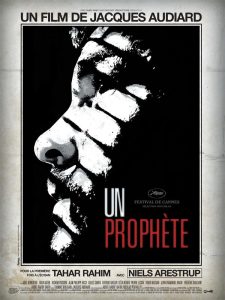 Tahar Rahim is amazing. He hits all the right notes with his performance and you can’t imagine that anything would take away your focus from him. That is, until Niels Arestrup enters the screen. I’m not exactly sure how he does it, but Arestrup was even better than that.

Audiard’s directing was great, too. He paces the story perfectly – you barely feel the film’s length – and there are a lot of subtle touches to the film that I enjoyed very much. Unfortunately, though, most of these subtle touches go in the religious corner, which I found neither necessary nor fitting.

Actually, I think it’s pretty weird that a non-practicing muslim would become the centerpiece of a film filled with christian imagery. [Maybe the film is filled with muslim imagery as well and I didn’t recognise them.] That’s probably why the film remained so pointless for me – I just don’t give a crap about the religious stuff. [Or it could be because it’s a French film.]

What I did enjoy though was the fine sense of humour, that always kinda caught you by surprise. Like when Malik’s murder victim keeps showing up – and it doesn’t get creepy at all. Instead it’s funny and extremely comforting.

Summarising: It’s a well-executed, interesting movie that either works for you, or it doesn’t. But it’s worth a try to find out in which group you belong.