Cemetery Junction is a movie I would have liked to have seen ten years ago, I think. It really spoke to my teenage self. There’s the question of leaving home, the issue of being more than people thought etc. Which were pretty important topics for me at the time (as I guess they are for most teens). And Cemetery Junction broaches them with warmth, understanding and intelligence.

This completely makes up for the fact that the storyline is pretty conventional. You know what’s going to happen five minutes in, and it happens exactly that way. This makes the movie less challenging than it could have been – but perfect soul food material.

What I did like about the plot very much though was how Freddie wins Julie: by respecting her, by seeing her as a person with her own wishes and goals. It is sad to say, but it’s rare that the hero in a movie acts that way.

The cast is excellent. That’s not surprising when it comes to Ralph Fiennes (who does his usual thing), Emily Watson (who it’s always good to see) or Matthew Goode. But also the younger actors could not only hold their own. Especially Tom Hughes made a big impression on me. I’m sure that we’re going to see more of him. 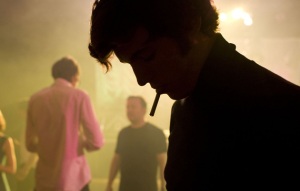