Plot:
In the near future, there are barely any people left – most of them have been turned into zombies. Among the survivors are Columbus (Jesse Eisenberg) and Tallahassee (Woody Harrelson) who stumbled upon each other by chance and decided to stick together for a while, though the obsessive and anxious Columbus and the toughtalking, explosive Tallahassee don’t have much in common. When they run into Wichita (Emma Stone) and Little Rock (Abigail Breslin), the girls first rob them, but lateron, they throw their lot together, hoping to reach a place where they’re safe.

Zombieland is an utterly charming movie*. It has a fine sense of humor, moves along at a quick pace, has a very nice soundtrack and most of all, an excellent cast.

I’d heard much about this movie before seeing it, and basically only good things, which usually makes me a little anxious because there’s rarely a movie that can handle so much good press. But Zombieland could.

It’s not perfect – the plot is only mediocre and the message maybe a tad too sappy, though the script wins by giving us convincing characters and by using a few brilliant ideas sparingly, but throughout the whole film, so you get them over and over, but never too much (though I could have done with a few more kills of the week). And of course Bill Murray’s cameo is made of awesome. 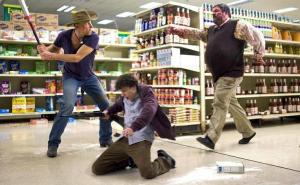 The cast was generally really good. I don’t think I need to mention that Jesse Eisenberg knows his compulsive nerds or that Woody Harrelson is great when he’s a crazy-ass freak (especially when he has as much fun as he had here). Emma Stone and Abigail Breslin give a little less flashy performanes than the two guys, but they’re still excellent.

Ruben Fleischer shows a lot of talent in his direction, and I’m looking forward to seeing more of him. The pacing is spot-on and the shots are really good.

With all the fun, you sometimes forget that it’s a zombie movie you’re watching, which makes the actual zombies a little more disgusting than usual. But the movie is still much more comedy than horror.

*You’d think it was weird to say that a zombie movie was charming. But this one is.