Plot:
Gustav Klimt (John Malkovich) is dying. He gets a visit from Egon Schiele (Nikolai Kinski) and together they delve into Klimt’s feverish subconscious to explore his life, his work and his relationships.

Holy bloody shit, this movie is a mess. The concept might – might – have worked, if the movie wasn’t so damn conscious [and kinda smugly self-congratulatory] about every little thing it did. Also, it was a bit ridiculous.

There are a few things about this film I didn’t understand. Why they chose to do it in English but cast a lot of Austrian actors [Georg Friedrich among them, which is great. He even got to say a line! :)] which meant that half of the dialogues were spoken in grating Austrian-accented English, for example. Or why they thought that it would be a great idea to make a movie that only makes sense to Klimt scholars [which I am not].

Other things were just plain bad: John Malkovich plays Klimt like he was a robot (what happened there, I wonder?) and the script was really badly written (which might be to do with the translating it back and forth that apparently happened in the process) but you knew that everybody involved thought that they were extremely clever which is a deadly combination. [The name-dropping alone usually happened in a really intrusive manner.] 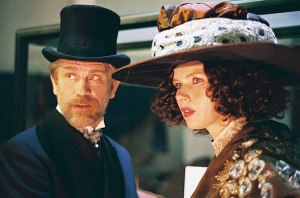 Generally the movie was much too conscious of itself. With almost every line you felt Raoul Ruiz was mouthing the words along and patting his own back at how brilliant he is and telling you “did you see what I did there? Did you see how fantastic I am?” [Which is also exactly the way Nikolai Kinski played Schiele – he looks the part, but you really can’t get any more “look I’m acting, look what I’m doing with my hands, look how crazy I can be, can you tell I’m acting yet”-y.]

I’m sure that if he ever read this review, Ruiz would be scoffing at my totally not understanding the movie at all and that I just don’t get the art. And he’d probably be right. But that doesn’t make this movie any better.

Summarising: skip it. Skip it hard. Unless you’re the world’s biggest Klimt fan.