The Good Heart is the newest film by Dagur Kári, starring Paul Dano and Brian Cox.

Plot:
Jacques (Brian Cox) is a misanthropic bar owner, Lucas (Paul Dano) a homeless young man who is nice to everyone. They meet in a hospital after Jacques suffers from a heart attack and Lucas recuperates after a suicide attempt. For some reason, Jacques settles on Lucas to be his successor. He takes him in and teaches him the way of the bar: basically, be as unfriendly as possible to everyone.

The Good Heart could have been really good. It’s got great actors and nice cinematography, unfortunately it also has a crappy script, a ridiculous storyline and Dagur Kári really did not convince me as a director. 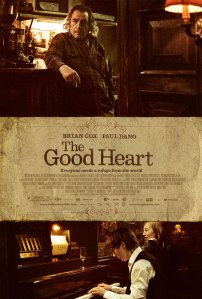 Do you know how hard I had to keep myself from writing, “Jacques is a misanthropic bar owner with a bad heart. Fortunately he meets young homeless Lucas who has a good one.” Not only would that have been the worst pun in history, it would have taken any chance from you to not guess the ending of the film – because the entire movie is based on this worst wordplay ever.

If the movie had been slightly more original, slightly more caring in the treatment of its plot, one might have been caught up in the kitsch, shed a tear or two at the ending and left the cinema cheaply manipulated but satisfied. Unfortunately this doesn’t happen.

Instead we get a weirdly acting Paul Dano (what’s with those hands and body language? why didn’t Kári put a stop to this? Or was it his idea?) and a seemingly bored Brian Cox who play severely disturbed characters and things really go downhill when the only female character is introduced (played by Isild Le Besco). This might have been a better film if it had just done without women at all.

I liked the cinematography, at least. Most of the film was shot looking colorless which fit the general mood very well. And there were some nice moments, like the scene pictured below.

One question remains after having seen the film: What is it with the hanged cat?

Summarising: Yeah… no. Miss it.