Plot:
Young Nigel’s (Oscar Kennedy) mum (Victoria Hamilton) has an aversion towards fresh vegetables and a seemingly general inability to not burn food (except toast, that is). This makes Nigel extremely curious of everything when it comes to food. So when his mother falls sick, he asks her to teach him how to make mince pie, which she does shortly before she dies (making food even more special). When his dad (Ken Stott) starts flirting with the cleaner Mrs Potter (Helena Bonham-Carter), older Nigel (Freddie Highmore) starts competing with her for his father’s attention – through food.

Toast is a very sweet movie with a very good cast and an even better script. It’s got just the right amount of 60s nostalgia, a nice sense of humor and generally makes for a pleasant watch.

I saw that Freddie Highmore and Helena Bonham-Carter where in this film and I didn’t bother to do more research. So, color me surprised that this movie is actually based on an autobiography. The script manages to avoid all the problems biographical  stuff (like life) usually has, like the lack of a coherent narrative or the sudden (dis-)appearance of characters.

It’s generally a very nice script. There’s a nice sensitivity to it and a fine sense of humor. It does get a little heavy-handed sometimes with the whole food-as-currency-to-buy-love-with thing, but it never gets too bad. And it does handle Nigel’s homosexuality very nicely. Young Nigel gets to be gay (it’s not the usual sudden discovery in adolescence) and it’s just a fact of his life, not its whole story. 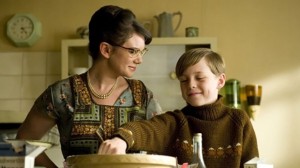 The cast was excellent. I expected no less from Helena Bonham-Carter and Freddie Highmore, but I was also really surprised by Oscar Kennedy – so young and already very good.

The setting worked very well – the music (as usual in 60s movies) and costumes, everything was just infused with the right amount of nostalgia. Nothing too sappy. Just always there.

And the lightning and cinematography looked great.

Summarising: Very good, and not only for a TV movie. You should check it out.