La danse is a documentary by Frederick Wiseman.

Plot:
Wiseman follows the ballet corps of the Paris Opera in its preparation of seven different productions, from Rudolf Nureyev‘s Nutcracker to Pina Bausch‘s Orpheus and Euridyce to Wayne McGregor‘s Genus. He shows rehearsals, team meetings and the general life at the Opera House.

There is loads of information in this film. Unfortunately, it’s unstructured, uncommented and if you don’t know everything already anyway, you’re going to be completely overwhelmed and confused – for almost three hours. At least the dancing is very pretty. 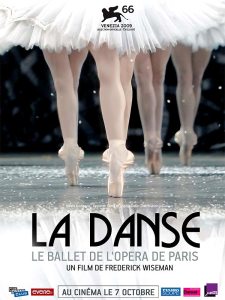 The film is not boring per se, even though you do feel its length. But I think it would have profited hugely by some kind of focus, or maybe a narrative. Maybe Wiseman could have concentrated on one production and seen it through from conception/rehearsal to premiere. Or he could have focussed on the different styles the choreographers had  for developing their shows.

Instead – unless you’ve spent your life at the ballet – you’re mostly wondering, “what choreography am I seeing just now? Who’s this dancer? I guess I’m supposed to know this choreographer…?” Would subtitles or some other kind of clarification really have hurt the film?
And, since the movie is almost three hours long, was another shot of Paris really necessary?

But when I gave up trying to understand what exactly I was seeing, I could instead focus on the dancing – and that really was wonderful. I came away completely in love with Wayne McGregor’s Genus and Angelin Preljocaj‘s Medea. I would have loved to see it in its entirety.

And some of the rehearsal scenes were fascinating to watch. Some instructions made more sense than others, but it was always interesting to see what the dancers made of it.

Summarising: Only if you’re a complete love of ballet and/or an expert.