Plot:
Po (Jack Black), head of the Furious Five – Tigress (Angelina Jolie), Mantis (Seth Rogen), Viper (Lucy Liu), Monkey (Jackie Chan), Crane (David Cross) – is pretty content with his life. That is, until the kingdom is threatened by the evil Lord Shen (Gary Oldman) who developed a new weapon that is able to defeat Kung Fu and with which he plans to take over. But a soothsayer (Michelle Yeoh) has predicted his defeat – and his fate and Po’s seem to be more closely tied together than both realise at first.

Kung Fu Panda 2 is a very sweet film and an excellent sequel.The cast is good, the story is nice, but it’s the animation that really stands out: it’s that fantastic. 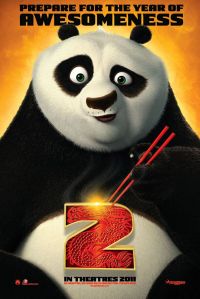 The whole film is really nicely animated but there are flashbacks to Po’s past that really are the icing on the visual cake. They’re done in a very distinct style and look beautiful.

Those scenes also totally made me cry. Not only because they were beautiful and nicely told but they are about a surprisingly heavy subject matter (genocide) that I just didn’t expect. Additionally, they tie into Po’s story with Mr. Ping (James Hong) and James Hong and Jack Black have a really good chemistry with each other. It might not be the most innovative portrayal of adoption but it’s also not offensive (which is saying a lot). 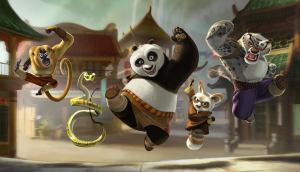 They were also smart enough to go away from the whole “a fat person can only be motivated by food” thing. Thank you, common sense, for prevailing.

The whole cast is really good. To my shame I have to admit that I didn’t recognise even half of the voices (because I suck at recognising voices in general). Not that it’s actually important as long as they do a good job. But it is kind of nice knowing that Shifu is spoken by Dustin Hoffman. Or that Gary Oldman really is brilliant in everything he does.

Summarising: If you liked the first one, you’re really gonna enjoy this one. Probably even more.