Plot:
Benjamin (Michael Angarano) is a huge SciFi fan. He especially admires the writings of Ronald Chevalier (Jemaine Clement). When he gets a chance to submit one of his own stories for Chevalier to judge – a story about Bronco (Sam Rockwell), a kind of space cowboy – the last thing he expects is that Chevalier steals the story. At the same time his story about Bronco gets adapted by local prolific but amateur filmmaker Lonnie (Héctor Jiménez) who takes some liberties with the story.

Gentlemen Broncos doesn’t work half as well as it should be. Even Sam Rockwell falls flat (!!!!). Jemaine Clement was wonderful, but most of the time the film just misses its notes for me. It’s humor is just a tad too immature and the good ideas are stretched a bit too far.

Usually Sam Rockwell makes even the smallest role in the shittiest movie sparkle and shine and worth it. But he just doesn’t stand a chance with what he’s given. I guess I’ve discovered Sam Rockwell’s limit. Who would have thought?

Jemaine Clement succeeds where Sam Rockwell fails: He really makes his Chevalier shine. The way he says “Chevalier” alone makes it almost pay to have seen this film. I was really surprised that he could make the incredible asshole vibe work that well.

I thought I detected some talent in Michael Angarano, but Benjamin was really not the character to show it.

There were moments in this that I enjoyed a lot. The way Benjamin sees straight through Chevalier, for example. A line here or there. The surveillance deer. But everytime I started to enjoy the film they piled more and more and more stuff on and then added a bit vomit and/or shit and it just all went to hell.

At least the opening sequence was brilliant. 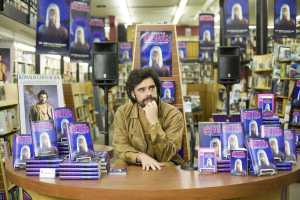 Summarising: Listen to Clement say “Chevalier” and that’s about all you need to see/hear from the film.