The opening night of the /slash Filmfestival ended with a concert of Sir Tralala together with Sheriff Melone, combined with a reading of Der Bibliothekar des Grauens (which translates to “The Librarian of Horror”).

The way they went about the show was that Sir Tralala and Sheriff Melone were zombies belonging to the Bibliothekar. Through various experiments, the Bibiliothekar discovered that the zombies react very well to making their own music and now they’re on tour together, with him reading texts and the zombies singing.

As a performance it was a bit eccentric, but a whole lot of fun. On the whole, I did not like the Bibliothekar’s texts that much, though there were awesome bits. The music was great though. 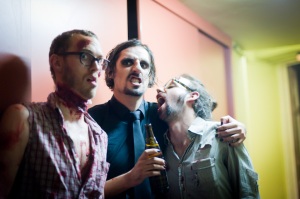 From their entry with the Addams Family title melody in a rather awful rendition to a great encore with The Cranberries’ Zombie (of course) and In the Pines, I really enjoyed Sir Tralala and Sheriff Melone who both have very nice voices.

Even though I thought that the texts by the Bibliothekar were trying a little too hard with the long combinations of various adjectives and loan words etc etc, they did tie the songs together in a cool narrative, telling of the zombies’ death and what happened afterwards.

Before the show I wasn’t sure if I should stay to see it or if I should just go home and sleep – but in the end, I’m very glad I stayed. It was a cool concert.