Plot:
While out hunting the family father Chris (Sean Bridgers) stumbles upon a feral woman (Pollyanna McIntosh) in the woods. He decides to capture her and make it a family project to civilize her. Since his family – wife Belle (Angela Bettis), daughters Peggy (Lauren Ashley Carter) and Darlin’ (Shyla Molhusen) and son Brian (Zach Rand) – are entirely under his thumb, nobody really says anything against that – at first.

I’ve started taking quick notes after every film I see because there’s just too long between me seeing them and blogging about them and I see too many films and anyway, what I want to say is the first thing I wrote down after this film was, “Bist du deppat” which literally translates to “are you stupid” and means something like “holy fucking crap, that is so… woah.” In this case in an entirely positive way.

The movie is very gruesome and extremely good. It’s a film that takes a while to be processed – and probably multiple viewings as well. It’s a movie that invites (over-)thinking it. Rarely have I seen such a nicely worked out feminist idea and I absolutely loved the ending. [I’m keeping this short since I could write a few articles just about the feminist theory this movie shows, but if you’re interested, let me know and I might do another article about that.]

This is probably the first time that a feminist revenge movie actually inspired me, but this one absolutely did, despite it having feminism of the pretty aggressive kind and the way the “traitor women” – the women helping with the bad stuff – being really harsh. [I so need to check out other stuff by Jack Ketchum/Lucky McKee.] 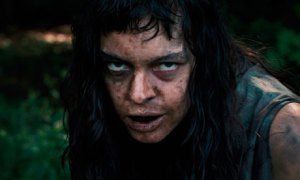 But apart from the feminism it was a really good movie, too. The cast was excellent – Sean Bridgers really was creepiness personified, but the women were even more amazing Pollyanna McIntosh, Angela Bettis and Lauren Ashley Carter were all great, in very different ways.

The soundtrack was used to great effect, with sometimes pretty jarring juxtapositions between the music and mood and happenings which I found really interesting.

In short, I just loved it.

Summarising: Probably my favorite film of the entire /slash Filmfestival.