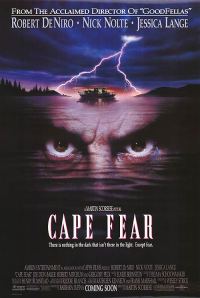 The cast was really good in this one, too. I loved that both Robert Mitchum and Gregory Peck got an appearance. And it’s not surprising that Robert De Niro can play a fucking psycho with apparent ease and he really is great in the role. Jessica Lange and Juliette Lewis are wonderful, too (also to no-one’s surprise).

Especially Juliette Lewis really lucked out with the script. I mean, both Leigh and Danielle get to be actual characters and not generally useless points of attack for Sam. And I really liked that it’s Danielle who gets to tell the story and that she got to be so many things at once: curious, scared, slightly in love with Max, a teenager, naive and a bit cynical, but never stupid. 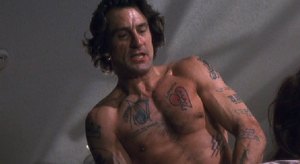 The only thing that the movie could have retained from the original, but unfortunately didn’t, was the understated violence. When Max [SPOILER] rapes Sam’s colleague and bites a hole into her cheek, that was a bit much. [/SPOILER] But at least the movie gets the perfidity of the victim-blaming absolutely right.

But the film is not only a win when it comes to the sexism, or better, the lack thereof. Scorses manages to rack up the tension that was just lost in the original for the most part. You really get to feel Sam’s desperation and his hopelessness and you can completely understand why he would resort to violence – you really can’t see any other options, just like him. That makes the movie pretty uncomfortable, but also gives it its strength. 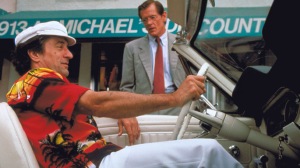