Plot:
Pirate Captain (Hugh Grant) dreams of the Pirate of the Year Award but doesn’t really stand a chance. In a desperate last attempt, he starts to board every ship he and his faithful band come past, hoping for one big loot that would make all the difference. And so it happens that he also boards the ship of Charles Darwin (David Tennant). Darwin discovers that Pirate Captain’s parrot is actually a dodo and promises him great riches if he came to the London science fair. And so Pirate Captain and his crew make their way to London, despite Queen Victoria’s (Imelda Staunton) hatred of pirates.

The Pirates! was brilliant in very many details and not brilliant at all in others. Overall it didn’t really come together to form one coherent whole, though it was enjoyable. 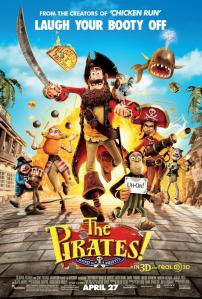 The cast was great. I have to admit that I didn’t recognize any of the voices (I knew Hugh Grant was speaking Pirate Captain but even so I didn’t think his voice was familiar), not even David Tennant. But I’m generally bad with voices, so there’s that.

I also liked the general idea of combining pirates and Darwin and science. It’s not the most obvious mash-up, but it works so very well. 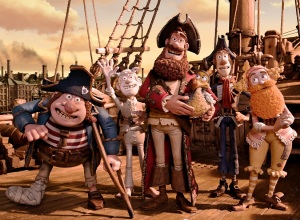 There were moments and jokes that were so absolutely brilliant and there were many of them. But in the end they were only moments. And there were bad moments as well. Cutlass Lizz crossed the line from stereotypical character to racist one. And that they would not stop milking all the nerd stereotypes unnerved me.

As deadra put it: they just got bogged down in the details and didn’t see the big picture. And so the movie just never really reached its full potential.