Fire is Kristin Cashore’s second novel. It’s a prequel to Graceling [which I’ve reviewed here] but stands on its own (and even spoils Graceling if you haven’t read it yet, so beware). Here’s my first review of it.

Plot:
In the Dells, there are monsters: Animals that look quite normal, except that they are brightly colored and with the power to control the minds of others. Monsters are carnivores with a special hunger for monster meat. Fire is the last of the human monsters. She’s impossibly beautiful, has bright red hair and is jealously guarded by her childhood friend and lover Archer.
Fire would have probably enough on her plate just by being herself – alternately admired and feared by everyone around her and struggling with the memories of a cruel father who used his monsterness for cruelty – but she gets caught up in the young king’s struggle for the throne and has to worry about assassins with weirdly clouded minds.

With the release of Bitterblue, I decided that a re-read of Fire and Graceling was in order before I delved into the new book. And I was just as caught up in Fire this time around as the first time. 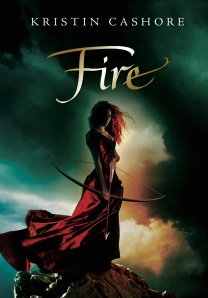 It is frankly amazing to me how little I remembered of my first read of Fire. I mean, I still knew that I loved it and especially the characters in it and I remembered one or two plot points, but I had already forgotten most of the twists and turns.

Despite that I did get a deeper look into the characters than the first time round – I did read it a little slower that usually helps – and I can honestly say that I love them even more now. Especially Brigan. Brigan somehow became even more wonderful, though I didn’t think that that was possible.

And all the women in this book… Starting with Fire, but also Roen and Hanna and Clara – I just really didn’t want to leave them behind at the end of the book.

Summarising: I’m still loving it. And if you haven’t read the Cashore books yet, do so now.