Plot:
Caius Martius (Ralph Fiennes) is a celebrated general, even though he is not particularly popular with the people of Rome who are starving because the rations go to the military instead of them. Caius Martius fights his blood-enemy Aufidius (Gerard Butler) in Corioles and is victorious, which gives him enough leverage to run for consul. Even though Caius Martius isn’t completely sold on the idea, his mother (Vanessa Redgrave) pressures him and he finally caves. But not everyone is a fan of Caius Martius and he quickly finds himself in trouble.

The play and John Logan’s script are really good, as is the cast. But the movie left me pretty cold – not only did I hate the camera work, the pacing was just off.

I hadn’t read the play before watching the film. Which I’ll probably not do again with Shakespeare. There are just way too many phrases and things that I wanted to mark and underline. Which is a little hard to do in a movie theater. Plus, when somebody is doing great things with language, I appreciate it most when I read it.

That is not to say that I didn’t enjoy the actors’ delivery and performances. Because the cast was freaking brilliant, even in the smallest roles. Which was to be expected, really, but the sheer force of the collective performance just blew me away. (Also, Gerard Butler talks with a Scottish accent which basically doubles his sexy. Maybe even triples.) 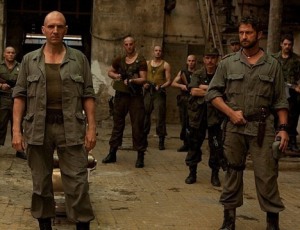 Ralph Fiennes knows his stuff when it comes to acting and apparently also directing other actors. But otherwise his direction was weak. The pacing was completely off and that became really annoying really quickly.

But it was the camera work that really killed the movie for me. I hated it with a fiery passion. It was shaky and way too much in the actors’ faces and after a while it became pretty unwatchable. Which was just a waste.

Summarising: Another director, another camera approach and I would have loved it. But when I’ll read the play, I’ll be imagining that cast.