Plot:
In 1979, Iranian revolutionaries stormed the USAmerican embassy in Teheran. In the middle of this confusion, 6 employees managed to flee to the Canadian embassy and hide there. The CIA hires exfiltration expert Tony Mendez (Ben Affleck) to get them out of there. So Tony concocts a story about the shoot of a SciFi movie to provide a cover for the six of them, which includes the basic pre-production of the film.

Argo is a classic, straightforward and very well-made thriller that hits all the right notes in the right way, even if it doesn’t surprise. But it makes the perfect case for a tried and tested format executed well.

I was a little hesitant about Ben Affleck as both director and actor. I haven’t seen Gone Baby Gone, but I did see The Town and I did not like it. But I have to admit that he really does a very good job here, again both as director and as an actor. (Also, he’s looking good – the style of the time really suits him.)

There are many people and fractions to coordinate in this film, most of them with known faces and Affleck does so very well. Of course, it’s always a pleasure to watch a cast like that, but even in the middle of all of that, Clea DuVall absolutely stands out during her brief appearances. [Why this woman isn’t winning all of the awards all of the time remains a mystery to me.]

I also really liked the cinematography and the camera work. It was absolutely dynamic and moving around a lot, but at the same time it never got fidgety.

The film did have a couple of lengths and could have been shortened a bit but it was not really boring – the story was too engaging and well-told for that. 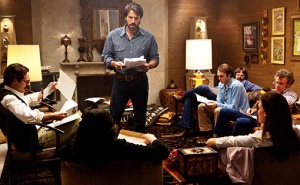