Plot:
Pat (Bradley Cooper) was just released from a psychiatric hospital where he got committed after a violent episode and diagnosed with bipolar disorder. His mother Dolores (Jacki Weaver) takes him home, where his fahter Pat Sr. (Robert De Niro) carefully tries to reconnect with him. Pat is obsessed with winning his ex-wife Nikki back. So when he meets Tiffany (Jennifer Lawrence), the sister of his best friend’s (John Ortiz) wife (Julia Stiles) who is still in touch with Nikki, all Pat sees in Tiffany is another chance to contact Nikki. But Tiffany who is just getting over her husband’s death brings her own set of problems. Among them a dance competition she doesn’t have a partner for. So she and Pat come up with a deal: Pat dances with her and Tiffany will deliver a message to Nikki.

On the surface, Silver Linings Playbook is pretty much your standard RomCom. But underneath that, it’s one of the most realistic and smartest films about mental illness Hollywood ever produced. I loved it.

Bradley Cooper really surprised me in this film*. So far he hasn’t really impressed me with his acting skills, but in this film he really is incredible. Especially his portrayal of the manic phases is absolutely spot-on. Jennifer Lawrence is brilliant, too. She usually is and she absolutely needs to be to keep up with Bradley Cooper. Her Tiffany is fragile and strong at the same time and she keeps that perfectly balanced.

And Robert De Niro hasn’t been as good as he was here in a very long time. His Pat Sr. dances right along the edges of mental illness himself (in fact, I’d say he fell off the edge a while back) and De Niro does that full justice.

But of course, the best cast is nothing without a good script, but they totally lucked out in that respect, too. It has good dialogues, great character development, it is smart and it has a sense of humor. It’s a killer combination.

I really want to read the book now. And then watch the movie again. 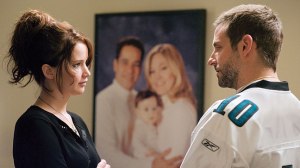 Summarising: you should definitely watch it.

*Also because short hair and a stubble and a not all smooth appearance suddenly made him attractive as hell.