Plot:
After a sniper shoots 5 people, the police quickly identify and arrest a possible suspect: ex-soldier Barr (Joseph Sikora). Barr doesn’t say a word, but to request Jack Reacher, a former military investigator who disappeared a while back. The police and the DA Helen Rodin (Rosamund Pike) are stunned by that request, and even more suprised when Reacher (Tom Cruise) turns up himself. He saw a news report on Barr and having investigated him before, he wanted to make sure that he is put behind bars this time. But Barr’s request makes him doubt his guilt, so Reacher starts to dig deep.

Jack Reacher really moves through all shades of horribleness. There is “just horrible”, there is “so horrible, it’s hilarious” and then there’s “so horrible I just wanna cry.” Unfortunately, it spends the least time in the second category. 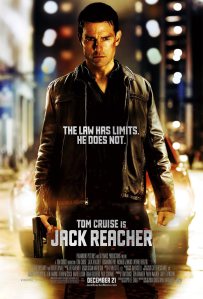 Really, people, this movie could have been really good in an awful way. Unfortunately it was too bad even for that. There is nothing redeeming about it, except for the eye-candy that is Jai Courtney.

It is completely misogynistic. Helen is a damsel in distress most of the time. When she does have an intelligent thought, it’s only so can Reacher can smile at her condescendingly because he came to the same conclusion, only hours earlier. There’s a young woman, who gets constantly insulted by Reacher and nevertheless wants nothing more than to be fucked by him, only to then be killed as punishment for Reacher. And those are all the female characters in the film. Yay!

It is completely predictable. The bad guy, while Werner Herzog is deliciously hammy, is so over the top that I couldn’t take him seriously for even a second. And the scene (which also featured in the trailer) where Reacher is chased by the cops and is hidden by the onlookers (which just had me worrying, to be honest) is not even the most ridiculous thing in the movie.

What it boils down to is that this film is utter trash, and offensive to boot. I wish I hadn’t spend any money on it.

Summarising: No. Just, no. Stay away.