Eddie Izzard came to Vienna with his newest program, Force Majeure. As a surprise guest, German comedian Michael Mittermeier showed up as well and did a small bit of his new program.

I was really excited to hear that Eddie Izzard was coming to Vienna. How great is it that an English comedian is on Europe tour? More of them should do that. And it certainly paid off to see him. Would do so again in a heartbeat. 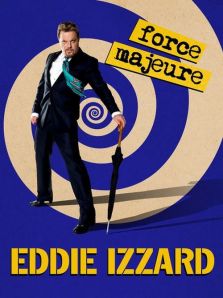 Michael Mittermeier is not my favorite comedian, but there are several things that I like by him. So getting a 15 minute bit from him was basically perfect for me. In theory. Actually, it was a bit disappointing. He did his show in English (he is currently touring a lot through Canada and the UK), which went pretty well. But then he did his most famous joke about Germans and Austrians and translated it into English and changed the Austrians to Londoners which was a little lazy. And it also doesn’t really work with Londoners. But mostly his bit was pretty nice.

But the reason I went there was Eddie Izzard and he was amazing. He actually wrote a follow-up to the Star Wars Canteen bit. And it works perfectly! Here’s the first five minutes of his show in Beograd:

Generally his show is amazing. He focusses on god and other major forces (hence the title) and since he’s an atheist, it’s brilliant. I cried from laughing so hard. He has tremendous energy (he even did a second show right after the one we saw) and just a really great presence.

Basically what I’m saying is, if you don’t love Eddie Izzard, you’re wrong.

Summarising: it was brilliant, I loved it and I want it to happen again.