Plot:
Victor (Colin Farrell) works for criminal Alphonse (Terrence Howard). Alphonse has been receiving threating letters from an anonymous person, the last one attached to the body of one of his employees, and Victor’s best friend Darcy (Dominic Cooper) is supposed to find out who is sending the letters. What he doesn’t know is that Victor is the one sending the letters, enacting a complicated revenge plan. Victor’s entire life revolves around this plan until he is contacted by the woman who lives in the apartment across from him, Beatrice (Noomi Rapace). Beatrice was in a car accident and has a scarred face. Now she also wants revenge and thinks that Victor can get it for her.

Dead Man Down creeped up on me. There was practically no marketing, it only got a limited release and it was barely mentioned anywhere. And I really don’t get it. Not only does it have a good cast and a director who made a name for itself (which is very marketable) – the film was absolutely fantastic. 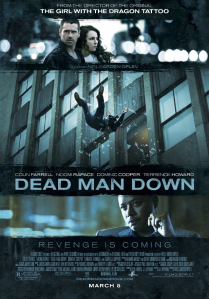 I have to admit that I didn’t know much about the movie going in. I saw the cast and I knew I had to see it – I mean, Noomi Rapace is great. Dominic Cooper is even better. And Colin Farrell could just stand there for hours and I’d probably be entertained [he’s getting sexier every time I see him], but he’s actually also a good actor, so count me into anything he does. So, anyway, I didn’t even read the plot description so I didn’t really know what this movie was about going in.

And watching it unfold was amazing. I was with the film from the first moment to the last. But I’m pretty sure that it would have had the same effect had I known a bit of the story – it was just really well told. Tense and hypnotizing, even if it’s not the most original story. 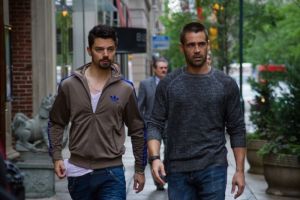 And I loved both Victor and Beatrice (and Darcy, too, because Darcy was awesome) and the chemistry they had together. The way their relationship slowly developed was beautiful to watch. And I loved how Beatrice’s scars were never really an issue for Victor. The person who struggles most with them was Beatrice. And it makes sense for her character; it’s not just that she’s a woman, so she wants to be pretty: she obviously likes to dress up, she’s a beautician – of course an injury to her face would upset her a lot.

I don’t know what else to say other than to urge you to watch it. This is certainly a film that has been unfairly overlooked.