Plot:
Dom (Vin Diesel) has been on the run outside of the US for a while when he gets the message from his sister Mia (Jordana Brewster) that his girlfriend Letty (Michelle Rodriguez) has been shot and killed. So he returns to the US to track down the killer. Which brings him directly into the investigation of by now FBI-agent Brian (Paul Walker) as they both try to infiltrate the organisation of drug dealer Braga.

After the utter drag that was Tokyo Drift, Fast & Furious was fun again. It wasn’t great and it wasn’t perfect, but it was fun. 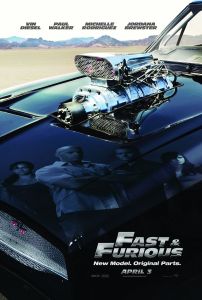 There were a couple of things that bothered me. First of all, there was the fridging of Letty (Michelle Rodriguez) which just wasn’t really necessary. Plus, Letty is awesome and more Letty is better than less Letty. And the reveal who Braga actually was, was completely obvious. It was so obvious that I was surprised when it turned out that not everyone was aware of who Braga was (I might have not paid close attention for a bit).

Generally the film was pretty much filled with clichés, as usual. In pretty much everything. The only one who got to break the mold a bit was Gisele (Gal Gadot) and I did enjoy her a lot. [How does Han (Sung Kang) fit into all of this, though? No idea.] 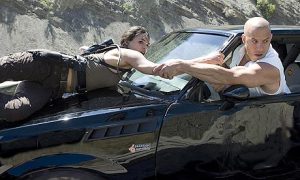 Generally the movie was entertaining. Maybe I just need Vin Diesel in my Fast & Furious films to really enjoy them. Or John Ortiz hamming it up and having a whole lot of fun with his role.

I have to admit that I am quite surprised by how much I’m enjoying these films since I still couldn’t care less about cars and races and chase scenes. And I am surprised that this film is from the same writer/director team as Tokyo Drift. But I am having fun.

Summarising: If you’re in the mood for an action movie, you’ll have fun.