Plot:
Paul (Mackenzie Crook) is a subway driver who just ran over two people in a couple of weeks. His colleagues tell him that he can get 10 years pay and retirement if he hits a third person in the same month. Since that would be exactly what Paul needs to finally write the book he’s been dreaming of, he tries to find a suicidal person to jump in front of his train on purpose. And he finds that person in Tommy (Colm Meaney) who just wants to set a few things straight before jumping. And for that he needs Paul’s help.

Three and Out is sweet and it has its fun moments, but it’s also pretty predictable and doesn’t bring anything new to the table. 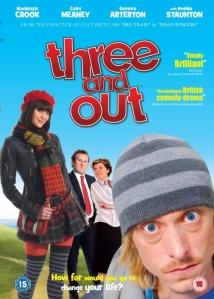 There are two brilliant things about the movie and those are Imelda Staunton and Gemma Arterton. They are brilliant, as usual. (Also, Gemma Arterton really does things to my libido that make me question my heterosexuality. Thank goodness that doesn’t bother me.)

Colm Meaney isn’t bad either, but Mackenzie Crook was rather bland. Which is also due to his character. Paul was your typical average dude stand in and if you’re not a dude, that is a little hard to care about. 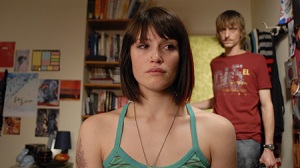 The film has some fun moments. Especially when Paul is looking for suiciders, it’s black humor at his finest. Though I guess you have to have the taste for that.

It was rather entertaining and I didn’t mind watching it, but I doubt much of the film will stick with me in general. Though the ending did surprise me a little bit.